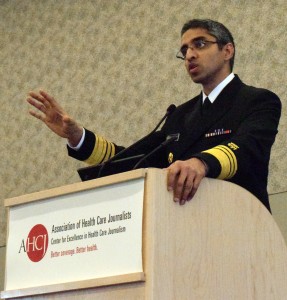 On Saturday, at the awards luncheon attended by hundreds of AHCJ members at Health Journalism 2016, Murthy promised to respond by mobilizing the medical community and issuing the first surgeon general’s report on substance abuse, addiction and health later this year.

He said he hoped the report would persuade the public to view addiction “not as a moral failing but as a chronic disease” that deserves treatment and compassion.

Alcohol will be included with other potentially addictive substances, Murthy indicated, responding to a question from Carla Johnson of The Associated Press.

Months before the report is published, a letter will go out to 1.1 million physicians, nurses, physician assistants and dentists announcing the surgeon general’s drive to reduce narcotic use and improve prescribing practices.

The goal: to help medical professionals treat pain effectively while minimizing the potential for addiction.

“We want people to reach for non-opioid options whenever possible,” said Murthy, the first Indian American to serve as the nation’s top doctor.

Today, 2 million Americans are addicted to opioids – a major gateway to heroin addiction and new HIV infections. The volume of drugs prescribed is four times greater than it was 15 years ago.

Murthy also said he’d work to expand the availability of naloxone, a medication that counteracts opioid overdoses, and medication-assisted treatments such as buprenorphine.

Although 2.2 million people could benefit from these addiction-relieving therapies, only 1 million actually get them.

Changing attitudes is another part of the surgeon general’s plan to put opioid addiction front and center on the nation’s health agenda. That calls for extensive public education and a concerted effort to dispel the stigma that surrounds addiction, he said.

Too often, this stigma prevents people from stepping forward and getting needed help.

Murthy doesn’t have much time to accomplish his ambitious goals. President Obama nominated the young physician to become surgeon general in November 2013, but his outspoken views on gun violence and vocal support for the Affordable Care Act provoked substantial political opposition.

Murthy was confirmed by the Senate just over a year later after indicating that he wouldn’t make addressing gun violence a priority. Surgeon generals are appointed for a four-year term, but the upcoming presidential election may affect how long Murthy ends up staying in office.*

In other remarks, Murthy spoke out about:

Clearly, those sentiments have been an inspiration and they were the emotional center of Murthy’s talk.

*(Editor’s note: This post has been clarified to indicate that surgeon generals are appointed for four-year terms.)