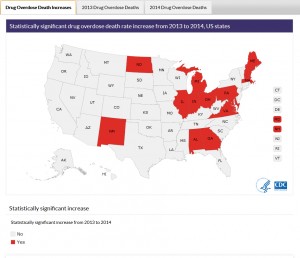 They help highlight the need for reporters not to lose sight of the ongoing efforts to control these powerful pills even as rising heroin use captures more of the headlines.

First, a December piece by the AP’s Matthew Perrone takes a close look at struggling efforts by the Centers for Disease Control and Prevention to rein in opioid abuse. In his piece, “Painkiller politics: Effort to curb prescribing under fire,” the veteran health writer wades through the backlash against the agency, which is seeking to release new guidelines on their use. The CDC recommendations were expected in January, but now face a delay after push-back from both the industry and the U.S. Food and Drug Administration. Activists seeking to curb what they see as over-prescribing of the drugs worry the controversy could jeopardize CDC’s efforts entirely.

“This highly unusual move – the CDC rarely advises physicians on medications, a job formally assigned to the Food and Drug Administration – thrust the agency into the middle of a long-standing fight over the use of opioids, a powerful but highly addictive class of pain medications that rang up over $9 billion in sales last year, according to IMS Health.

Critics complained the CDC guidelines went too far and had mostly been written behind closed doors. One group threatened to sue. Then earlier this month, officials from the FDA and other health agencies at a meeting of pain experts bashed the guidelines as shortsighted,” relying on “low-quality evidence.” They said they planned to file a formal complaint.”

Why is the CDC still worried about opioid medications? Perrone walks readers through the backstory of the drugs’ surge in the 1990s and how they became the go-to pills for more everyday aches and pains. CDC had proposed calling for other remedies, such as physical therapy, to come first and make drugs like Purdue Pharma’s Oxycotin an option of last resort. The industry pushed back, with an industry-funded group of pain doctors calling for a congressional investigation into the CDC’s handling of the guidelines. Another group representing pharmaceutical legal interests wants the CDC to start over.

“Industry-funded groups like the U.S. Pain Foundation and the American Academy of Pain Management warn that the CDC guidelines could block patient access to medications if adopted by state health systems, insurers and hospitals. Such organizations often look to the federal government for health-care policies,” Perrone wrote. Advocates worry such lobbying will stall efforts to curb opioid abuse altogether.

Separately, the CDC in December released its own data on deaths from opioid overdoses – including painkillers and heroin – over 15 years, which showed an all-time high in 2014. That year, overdose death rate was nearly 15 per 100,000 people in the United States, according to the agency’s Morbidity and Mortality Weekly Report, compared to about 6.2 such deaths per 100,000 people 2010.

“The most commonly prescribed opioid pain relievers, those classified as natural or semi-synthetic opioids such as oxycodone and hydrocodone, continue to be involved in more overdose deaths than any other opioid type,” the CDC said in a release, adding that such deaths rose 9 percent.

“These findings indicate that the opioid overdose epidemic is worsening,” CDC researchers wrote. “There is a need for continued action to prevent opioid abuse, dependence, and death, improve treatment capacity for opioid use disorders, and reduce the supply of illicit opioids, particularly heroin and illicit fentanyl.”

Their report, which includes a state-by-state map of such deaths, also showed such deaths highest in West Virginia, New Mexico, New Hampshire, Kentucky and Ohio. While the CDC’s data clearly shows an uptick in heroin-related opioid deaths – they’ve tripled since 2010 – the rate deaths involving overdoses of opioids such as morphine and oxycodone “was the highest among opioid overdose deaths,” the agency notes.

If coverage of painkiller abuse has taken a bit of a backseat over the past year to related stories on heroin, it’s worth taking another look at the issue this year, especially on action or inaction on tacking painkiller abuse.

Editor’s note: AHCJ members may be interested in a recent thread on our discussion list about opiods and the perspective of pain patients.