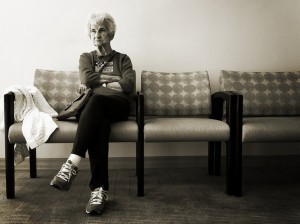 When older women get divorced, their new status often puts both their financial future and health at risk than that of older divorced men, a variety of studies have documented.

Researchers at Bowling Green State University in Ohio recently found gray divorced women suffered the most economically, with more than one-quarter (27 percent) of them classified as poor. Just 11 percent of gray divorced men are in poverty. Never-married women also suffer economically in their later years, with 25 percent living in poverty.

“Their Social Security benefits are typically low and their poverty rates are quite high, indicating Social Security alone is not sufficient to prevent them from falling into poverty,” Brown said.

According to this NPR story, the divorce rate of boomers doubled between 1990 and 2010 – from 1 in 10 people over age 50 divorcing in 1990 to 1 in 4 two decades later. It’s more likely to be women who come up short financially. The Kaiser Family Foundation reports that about 10 percent of U.S. adults 65 and older lived in poverty in 2014. The foundation’s report on the supplemental poverty level found that nearly half of all Medicare recipients in 2013 were at or below 200 percent of federal poverty level (about $23,600 annually). Women, Hispanics, and black older adults in general were more likely to be poor than older white men.

Older adults living in poverty lack the necessary resources to keep themselves healthy. They often go without their medications or proper nutrition, Marnova Ceide, M.D., a geriatric psychiatrist at Montifiore Medical Center in the Bronx, N.Y., said in a phone interview. “They’ll eat unhealthy foods which are high in sodium and fat because it’s cheaper. But this only worsens conditions like hypertension.”

“Divorce is stressful at any age but especially for people already managing multiple chronic conditions it can increase risk of hypertension or coronary artery disease, ulcers, sleep disorders and affect appetite – whether over- or under- eating,” Greenberg said, adding that changes in nutritional status can affect absorption and metabolism of medication.

It’s not all bad news

Sometimes, divorce can be a mixed blessing. Ceide related the story of a woman whose husband left her after 50 years of marriage. The loss of her daily routine and subsequent social isolation resulted in significant stress and depression. She also stopped taking her medications properly.

The woman was happy that her husband was gone because he was abusive, said Ceide, but on the other hand, “the change in her life routine and loss of a person there for a half-century was hard for her to cope with.”

For those in their 80s and beyond, the effect of multiple chronic conditions, and side effects of medications, can noticeably impact executive function, which is the decision making part of the brain. When a spouse leaves it becomes harder for the other person to think abstractly and to come up with a plan B or C for problems, Ceide said. “A good support system of family and friends is vital.” Resilience becomes more difficult without it.

Regardless of the circumstances, “It’s still the loss of one’s marriage,” Greenberg said. There’s added stress of dealing with changes in health benefits, living arrangements and friendships.

There also may be other, unfamiliar, health issues to grapple with. “Some people may be at risk for sexually transmitted diseases or HIV,” Greenberg said. “I’d advise them to get screened if they or their former spouse was engaged in sex outside of the marriage – or if they’re unsure.”

What about health benefits?

Health insurance – confusing in the best of circumstances, becomes another stress point. If a spouse has been covered under a partner’s health plan, there could be a loss of benefits, according to Casey Schwarz, Senior Counsel for Education and Federal Policy at the Medicare Rights Center. Since a woman’s work history tends to be more sporadic than a man’s, they likely will be the ones to lose out.

According to the CMS, a person who did not work outside the home long enough to be eligible for Social Security benefits may be eligible for free Medicare Part A based on their spouses’ work history. “There may also be other dramatic changes ahead, such as penalties for late enrollment in Part B, or major gaps in coverage, so it’s important for the lawyers to work out continuation of health benefits in any settlement,” Schwarz said.

If one spouse is still working, their employer’s plan may have different rules for covering a former spouse. Schwarz recommends that anyone going through a divorce contact Social Security and, if appropriate, their employer’s benefits manager, to ensure accurate interpretation of current regulations.

With all of the upheaval that comes with divorce, how can older adults help themselves stay healthy throughout this major life change?

Greenberg advises devising a plan that includes social and physical activity. “I would tell any of my patients to try hard to keep up friendships and avoid social isolation,” she advised. Senior centers, local area agencies on aging and hospital social workers can help put people in touch with community based programs and support groups.

Talk to the primary care provider, Ceide said. Most are trained to help patients cope with emotional stress in addition to physical problems. “It’s also very important to maintain strong social networks. Isolation starts the cycle of depression. So find people to talk to – friends, your adult children, a spiritual leader, or a health care professional.”

Even the most amicable divorce can be rough for older people. Don’t try to handle it alone, the experts advise.