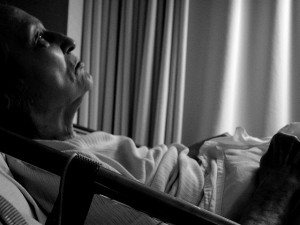 While waiting for a shuttle bus at the annual meeting of the Gerontological Society of America in Orlando, I met a fellow conference attendee who worked for a drug company. When he mentioned his company was researching a vaccine for a viral infection called respiratory syncytial virus, commonly known as RSV, I had to scratch my head.

I stupidly thought it was one of those recently concocted pseudo-conditions drug companies occasionally tout to market new products.

Holy rhino virus, was I wrong. I’ve been a health and medical reporter for more than 20 years and had never heard of RSV. It’s the most common cause of bronchiolitis (an inflammation of the lung’s small airways) and pneumonia infections of the lungs, among children one and younger, according to the U.S. Centers for Disease Control and Prevention.

How did I not know this? Where has RSV been hiding all my life? Not only had my children and grandchildren almost assuredly been infected with this virus, I probably had it as well.

Part of the problem is that RSV symptoms are similar to the common cold or flu, with runny noses and decreased appetite as the initial indications and coughing, sneezing, fever and wheezing appearing one to three days later. Like colds, RSV infections are very common. Also like colds, “there is no specific treatment for RSV infection.” according to the CDC’s website.

But who’s ever heard of an RSV alert? This virus needs a press agent.

There is a medicine that is used prophylactically on at-risk babies, but is not used for treating adults. Like colds and flus, RSV also spreads from coughing and sneezing droplets containing the virus, which can survive on many surfaces and later pass by touch.

Pediatricians, of course, have been familiar with RSV for decades, as well as many parents of young children. But it is often misdiagnosed as cold or flu, though tests exist to identify it. Pediatricians say that, in healthy children, the distinction between a cold and RSV is probably not important. Most kids recover quickly. However, in children or seniors with compromised immune systems, testing is more important. RSV can be identified by analyzing nasal secretions.

Thomas Yoshikawa, M.D., deputy chief of staff for geriatrics and extended care and special projects at the V.A. Greater Los Angeles Healthcare System, said RSV is known to primarily attack children. But Yoshikawa, a professor at the UCLA medical school, said geriatricians have realized in the past two decades that many older patients once thought to have the flu really had RSV.

“The problem is that most people don’t consider RSV as a cause of respiratory infections in older people, especially in nursing home residents,” he said.

Until recently diagnosis was through serology tests that took weeks to learn results. “Now we can take nasal secretions and test for the RSV antigen,” he said.

Another reason the virus may have slipped under the radar is that most health care providers are well versed and knowledgeable about flu infections, but less steeped in RSV, Yoshikawa said. “We all tend to consider the diseases we know most about.”

The geriatrician said that CDC data did not indicate that RSV was a major respiratory viral infection in older adults until recently and is often overlooked. He pointed out that there is no consistently effective anti-viral drug treatment for RSV.

More information should be disseminated by local health officials and the CDC to better inform health care providers. “If CDC puts out a health notice, most physicians pay attention,” Yoshikawa noted. “And once physicians are more aware of RSV as a potential threat to adults, they will then teach and inform trainees and medical students.”

Marie A. Bernard, M.D., deputy director of the National Institute on Aging, said healthy older adults usually suffer mild RSV symptoms of runny noses and coughs for a few days before disappearing. But Bernard said adults with compromised immune systems, particularly those residing in nursing homes and other places with large populations of older, frail seniors, often experience more severe symptoms. The NIA’s senior geriatrician said only recently has RSV been recognized in geriatric circles as a threat, perhaps because of better diagnostic tools.

“We’re in an evolving landscape,” Bernard said. “Soon we may be able to say what to do to prevent RSV. But now we’re doing the same things we’ve always been told to do.”