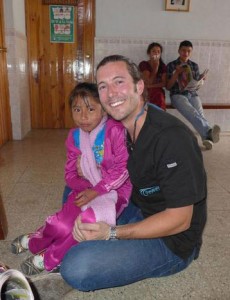 Sara Schilling of the Tri-City Herald in Kennewick, Wash., recently caught up with a local dentist who channels his wanderlust into helping others.

His name is Bart Roach.

When Roach is not taking care of his own patients and pitching in at a local clinic for the poor, he is trekking to faraway places where children are suffering from untreated disease.

The walls of his office are decorated with images and souvenirs of his travels. The computer in his office is filled with the photographs, Schilling writes.

“In one shot he’s in the highlands of Guatemala.

“In another he’s on the water in northwestern Cambodia.”

“Adventure dentist,” he said with a laugh as he scrolled. “It was meant to be tongue-in-cheek but it’s actually a pretty perfect description.”

This month, Roach heads off on another journey, this time to the Ladakh region of India on a trip with the nonprofit Global Dental Relief (GDR) a group he has volunteered with before, Schilling tells readers.

The organization was founded 14 years ago as the Himalayan Dental Relief Project by former Colorado State Parks director Laurie Mathews and Colorado dentist and writer Andrew Holecek. While on sabbatical in Nepal the two said they were struck by the shortage of dental care in a country which, at the time had roughly 120 dentists for a population approaching 24 million.

The nonprofit has expanded over the years to serve other far-flung places where oral health care is scarce: India, Guatemala, Vietnam, Kenya and Cambodia. Because of the depth of the need, the trips to the remote communities served by GDR are at once deeply rewarding and grueling. Roach can count on performing hundreds of procedures including fillings and extractions. He also offers preventive care, such as dental sealants, Schilling writes.

In addition to his work with GDR, Roach has started his own nonprofit with a special focus on the dental needs of the people of Guatemala.

“His mother, Nancy, is co-founder of the organization, called Sonrisa Immaculata, or ‘immaculate smile’ in Spanish,” writes Schilling.

“Some patients get especially close to his heart. On a recent trip to Guatemala, he treated a teenage girl with teeth so bad she needed several pulled.

“He wrote of her situation on Facebook and friends back home pitched in to cover the cost of partial dentures.”

Roach calls himself a “student of the world” who is eager for new experiences. But he also tells Schilling that his travels are stirred by an awareness of the blessings he has received in his life and the responsibilities he feels come with them.

“You have an obligation to give back to your community and your global community,” he says.

The Tri-City Herald has promised updates on Roach’s trip to India.

Do you have an “adventure dentist,” hygienist or dental assistant in your community? Maybe he or she has a story to tell.