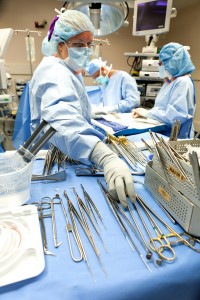 Whether consumers are choosing a car, a household appliance or even a nursing home, there are ratings and reviews available to make the best choice. But patients are often blind when choosing a surgeon.

Surgeon Scorecard, a database released by ProPublica this week helps shed some light on that area with an analysis of death and complication rates for nearly 17,000 U.S. surgeons for eight common surgical procedures. This is the first time this information has been available to the public.

Sisi Wei, Olga Pierce and Marshall Allen used Medicare billing records for in-patient hospital stays from 2009 through 2013. They excluded cases that involved trauma and high-risk cases and adjusted the analysis to account for patients’ health and age, luck and the hospital’s overall performance. They involved panels of doctors in the analysis, including surgeons who specialize in the rated procedures. Read more about the methodology here.

As Pierce and Allen point out, most patients think it’s important to choose a good hospital. But they found “that even within ‘good’ hospitals, performance between surgeons can vary significantly. Half of all hospitals in America have surgeons with low and high complication rates.”

While the Centers for Medicare & Medicaid releases data about hospitals’ overall performance through Hospital Compare (data also available from AHCJ), the agency hasn’t required hospitals to track death rates and complications by doctor. According to Pierce and Allen, “Some experts say it’s time to put more emphasis on the role of individual practitioners.”

“The idea that it’s all systems and there are no individual performance differences is absurd,” said Dr. Robert Wachter, chief of medical service at the University of California, San Francisco Medical Center and a nationally known expert on patient safety. “A good system has a mechanism to identify poor performers and either make them better or get rid of them.”

ProPublica acknowledges that plans to publish the Surgeon Scorecard were controversial, even noting that Johns Hopkins physician and patient safety expert Peter Pronovost, M.D., first lauded the project but more recently has criticized the effort. That criticism is included on a page intended to further the conversation about patient safety that invites experts to weigh in on the project.

A number of Gannett news organizations are using the data to report on local doctors; see a collection of the stories they’ve found.