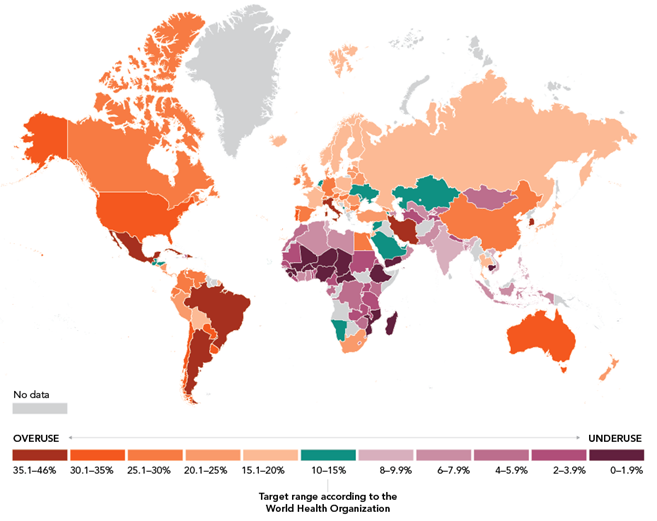 Courtesy of Neel Shah, M.D.Health reformers are grappling with how to bring down the high rate of cesarean section deliveries in the United States. The U.S. isn’t the only country in the world overusing the procedure, but it does have one of the highest rates.

I recently heard Neel Shah, M.D., an obstetrician at Beth Israel Deaconess Medical Center, the founder of Costs of Care, and associate faculty at Ariadne Labs (more about all of that here) speak about health care quality and delivering babies.

We’ve all heard about unnecessary cesarean sections (and elective induced early births, although that’s a related but not identical set of challenges). Many of us tend to think of it as a doctor-centered issue. Some doctors perform more C-sections than others and there are a host of reasons, ranging from how and where they were trained to how they assess and tolerate maternal risk to time management and financial considerations.

But Shah challenged me to think of unnecessary C-sections as a hospital management or system engineering problem – not just a problem created by individual doctors.

The way that labor and delivery systems are organized – the physical set up, the workforce, the use of resources – influences how decisions are made about C-sections. And there’s a huge amount of variation, from hospital to hospital, a 10-fold variation. Nationally the rate varies from 7 percent to 70 percent of births. There’s variation even in hospitals that are close geographically – and Neel points out much of the variation appears to be independent from women’s true risks and preferences.

Here’s a summary of his message – and below you’ll find some resources that may help you write about this topic in hospitals in your state or community.

Envision a busy hospital labor and delivery room department: In 21st century America, it’s comparable to an ICU, with a huge amount of monitoring, a relatively high nurse-patient ratio, and its own operating room(s).

The charge nurse is watching two big LCD monitors, covering the 28 nurses she’s supervising (and yes, the nurse is probably a she.)

There are four more huge screens with information about the 22 labor and delivery rooms and the five ORs. She’s also watching eight smaller screens feeding data from 20 fetal heart monitors.

And there’s an old-fashioned whiteboard-style dashboard about the rest of the floor – who, what, and where, including the physicians.

She has to manage it all, a conveyer belt of birth. Shah calls it the “Pressure Tank.”

A C-section is just easier for the hospital – and it brings in more money.

And there’s a growing recognition that unnecessary care can cause harm – including harm to a woman undergoing a C-section. Harm can occur at the time (blood clot, hospital-acquired infection, etc.),or in subsequent pregnancies (scarring that increases risk of a condition like placenta previa.)

“When I’m on the labor floor now, I know how many nurses there are, how many rooms are occupied. I think about management.”

But that’s him. It’s not how most doctors think. And that’s probably going to have to change.

And hospitals have to think about it too. Some are working with Ariadne Labs to study how to re-engineer Labor and Delivery to bring down the C-section rate. Others are figuring it out on their own.

What’s going on in your community?

You get the idea – send us stories you write on this, and we’ll follow up.