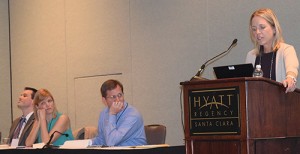 The Health Journalism 2015 panel on e-cigarette use, or vaping, was anything but dull. Des Moines Register health reporter Tony Leys lined up the selection of guests, including public health researcher Judith Prochaska of Stanford Prevention Research Center, American Vaping Association president Greg Conley and Atlanta-based independent journalist Sonya Collins. The highly divergent presentations of Prochaska and Conley expertly set up Collins’ final presentation to talk about the middle ground she found in her reporting.

The greatest challenge for journalists in writing about e-cigarettes is that they are so new – the data we would like to have are not available yet. The data that we do have are greatly limited. The opinions and perspectives of stakeholders vary greatly and are passionate. Public health researchers who recall the days of Big Tobacco’s lies regarding the harms of cigarettes are deeply skeptical and uneasy about investigating potential benefits or reduced risks from e-cigarettes.

But vapers themselves, equally suspicious of and resentful toward Big Tobacco, see e-cigarettes as life savers, a harm-reduction method that has allowed them to quit smoking combustible cigarettes when nothing else worked for them. Further, there are public health researchers who agree that using vaping as a harm-reduction method has value. And the actual research? Spotty and with few clinical outcomes to speak of. These conflicting realities are a recipe for ongoing Twitter arguments – the vaping community is very active on Twitter – and shouting matches, one of which nearly occurred during the panel between Prochaska and Conley.

Collins brought some sanity to that discussion by acknowledging the valid points of both vaping advocates and public health researchers. She noted that doctors will not make public recommendations to try vaping but often will individually counsel patients to try it when other methods fail. Perhaps her most important advice during the panel was to encourage journalists to talk to vapers. When data is scarce on an emerging and controversial technology, talking to the real people on the ground is just as important as talking with a wide range of public health researchers.

An extensive Storify collection of tweets during the panel offers a glimpse into the major points made by each of the panelists as well as additional links from vapers on Twitter who followed along.