Sandra Jordan is a health reporter at the St. Louis American. She attended Health Journalism 2014 as an AHCJ-Ethnic Media Health Journalism Fellow, a program supported by the Leona M. & Harry B. Helmsley Charitable Trust.

View all posts by Sandra Jordan → 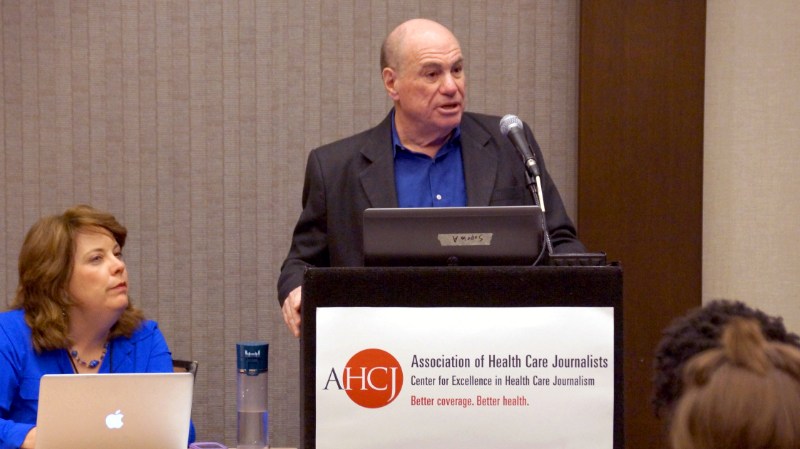 Are there more people with allergies, allergic responses, asthma and eczema than in years past? Is the environment the blame? The short answer is yes and yes.  However, there are other factors involved.

The panel discussion at Health Journalism 2014, “The Dirt on the Allergy Epidemic,” focused on causes and prevention of eczema, asthma and food allergies in children.

Since allergies were not prevalent 60 years ago, Erwin Gelfand, M.D., chair of pediatrics at National Jewish Health, said the difference points to environmental and behavioral factors.

“There is no doubt that the incidence of allergic diseases has increased and it can almost be traced five to six decades ago,” Gelfand said. “And the big question is; what changed that allowed this to go on?”

Our genetic background is our susceptibility genes, he said.

First, an immune response is required in order to be allergic, Gelfand said.

“If you are born without an immune system, like the ‘bubble baby,’ you do not have the capacity to develop an allergy,” Gelfand said. “You need an immune system; so we have a trigger; it impacts the gene and environment interaction.

Gelfand said immune responses can be protective, to fight off viruses and fungal infections; or it can be a pro-allergic response, developing eczema, allergic rhinitis, hives and the like.

Experts want to drive the body’s immune response from one of reaction to calm acknowledgment.

The age of onset when a person becomes sensitized and goes on to develop an allergic reaction is critical, Gelfand said, citing a study that indicated the incidence rates of asthma are in the earliest years. “We think that 70 to 80 percent of adult asthmatics can trace the origin of their disease to the first years of life,” Gelfand said. “And there’s a whole body of literature that says, even in utero, during pregnancy, the fetus may be exposed to certain things that condition their immune response to become a pro-allergic response as opposed to a protective response.”

Factors being studied include stress and psychological factors; vaccine and acetaminophen use, microbials and antibiotics, diet and folic acid supplementation for pregnant women.

“Every mother is given folic acid, often B12 and choline, and it’s turned around the incidence of spinal cord problems, spina bifida. But, on the other hand, folate, B12, choline – are so-called methyl-donors, and by methylating certain genes, we turn off certain functions,” Gelfand said. “By methylating the protective genes, maybe we have increased allergic disease.”

Gelfand referred to a study in Scandinavia, on mothers and their offspring and the incidence of having children with atopic diseases – asthma, allergic rhinitis and atopic dermatitis.

“In Scandinavia, they’ve associated the increase of allergic disease at the time folic acid supplementation was introduced,” Gelfand said. “An epidemiologic association – not cause and effect.”

Gelfand said researchers are studying pregnant mothers, their diet throughout time and methylation.

“We have now identified 64 genes that are differentially methylated in the high-risk mothers vs. the low-risk mothers that transmitted to their offspring.”

In contrast, Mark Holbreich, M.D., a diplomate of the American Board of Allergy and Immunology, who specializes in pediatric and adult allergy and asthma in Indianapolis, Indiana, discussed studies on Amish farm communities. The Amish work and live off the land, shun motorized vehicles and other modern conveniences. Holbreich said a study of Swiss farm children indicates that allergy incidence is very low among the Amish.

“Only 7 percent had allergies, which is the lowest reported prevalence of allergic disease of any population within a westernized country that’s ever been reported.” Holbreich said.

“There is something about the milk that we don’t understand yet,” Holbreich said. “Raw milk is not safe… If you don’t grow up with your mother drinking raw milk when you are pregnant and you end up drinking raw milk – it is a dangerous thing.”

For years, doctors have been advising parents to hold off on introducing certain foods like milk, soy, eggs and peanuts, because of the potential for allergic reaction. Panelists say that old advice has been re-evaluated to introduce foods sooner.

“In English speaking countries, there’s been a doubling to tripling of peanut allergies,” Lack said. “In the UK, there is an EpiPen self-injectable device in just about every classroom, so this really has become an epidemic.”

To eat or not to eat allergenic foods – when to eat them, how to eat them, how much, how frequently, if should it be done at the same time as breastfeeding or afterward –there are very few evidence-based guidelines on how to feed our children, Lack said.

Dan Atkins, M.D., associate professor of pediatrics and section head of Allergy at Children’s Hospital Colorado, said a careful history is important to identifying the reaction to the allergy, whether it is a toxic, metabolic, pharmacologic or other reaction.

“We’re trying to decide if the immune system plays a role in production of the reaction or not. If it doesn’t, we label that it a food intolerance. We go through what they need to do to avoid that food,” Atkins said.

If the immune system is involved, the next thing doctors try to decide is whether it is an IgE mediated reaction or not, he explained. Skin testing or blood tests for IgE serum may determine which foods trigger the reactions. IgE-mediated allergic triggers are in food proteins.

“One of the problems is, we can’t determine yet, who is going to have severe reaction yet without a history of exposure,” Atkins said.

On the other hand, there are children who have IgE response but can eat certain foods that don’t prompt a clinical reaction. “You have to combine the history of exposure, the reaction after, with a positive skin test and a positive blood test or you can remove too many foods from a kid’s diet,” Atkins said.

He said food avoidance needs to be taught, through consultation of a dietician.

The food challenge, which exposes children to food allergens in a closely monitored clinical setting is safe and accurate, if done properly by persons experienced in them, Atkins said.

Regarding children using food to bully allergic children, Atkins said, “We’ve got all of these kids running around and they are afraid they will die from minor exposure, and that’s unfair.” He said physicians need to do a better job of teaching children about risk and day-to-day casual exposure.

A couple of the doctors on the panel have said they are available for follow-up interviews:

1 thought on “Getting the dirt on the allergy epidemic #ahcj14”