View all posts by Hoag Levins → 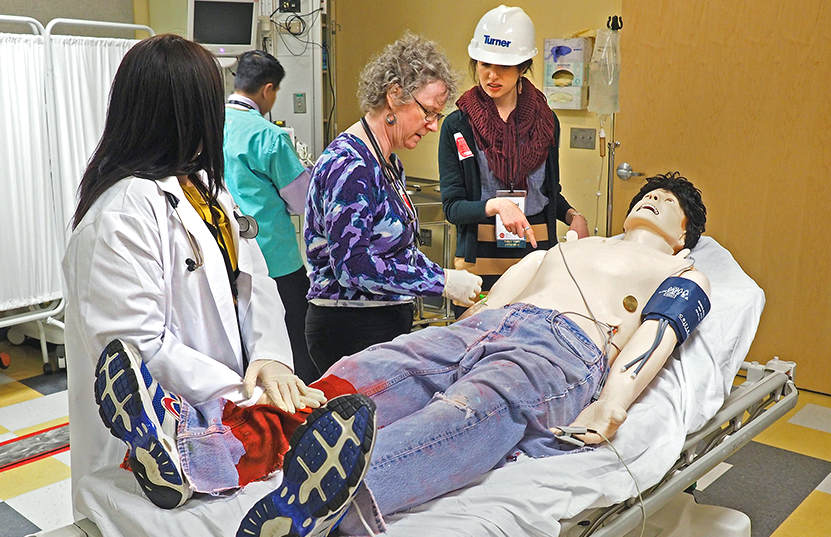 Thursday’s field trip to the University of Colorado Anschutz Medical Campus included a visit to the School of Medicine’s health simulation facility, the Center for Advancing Professional Excellence. As part of that visit, AHCJ members were selected to try their hand at treating a computer-controlled dummy patient. This photo shows three of them in the simulation “emergency room” with a dummy industrial-accident patient. They are:

In the hard hat, Rachel Roubein, a health reporter at the Carroll County Times in Westminster, Md., is playing the role of “friend or family member” who delivered the patient to the ER and then became obnoxious, creating an added stress level under which medical personnel had to work.

Joey Failma, in the green scrubs, is a CAPE staffer playing the role of ER doctor.

Marijke Vroomen-Durning, in the middle, is – in real life –  a registered nurse and an independent journalist from Montreal, Quebec, playing the part of an ER nurse.

Margarita Cambest, in the white coat, is a staff reporter at the Kentucky New Era in Hopkinsville, Ky. She is acting as a nurse’ aide keeping pressure on a severely cut leg.

With control room computers changing the patient’s condition to dire, and the monitors showing his rapidly declining biometrics, the scene was a frantic, but educational, one. In the end the patient died and the AHCJ members left with a much better sense of both the importance of clinical simulators in the medical education process as well as the kind of often-excruciating stress ER clinicians must work in.