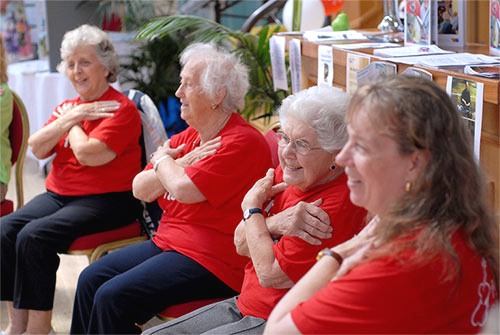 “Have we matched our healthspan to our life span?”

AgeWave.com founder and author Ken Dychtwald asked that question yesterday of a standing-room-only audience at the American Society on Aging Conference in San Diego. “Are we doing the right version of aging?”

Dychtwald moderated a panel discussion on the social, health, financial and cultural implications of our aging population which included Joseph Coughlin of the MIT Age Lab; Fenando Torres-Gil, director of the Center for Policy Research on Aging, UCLA School of Public Affairs; and Jo Ann Jenkens, chief operating officer of AARP. The speakers joined Dychtwald to offer some predictions on a very different looking future of aging than previous generations lived through.

“The new challenge of an aging society is not just living longer,” said Coughlin, “but how we will live better.” After getting some appreciative laughter when showing a slide of aging hippies, and commenting “These are the people your parents warned you about,” he turned serious and asked, “Do you think these folks are going to age as politely and nicely as their grandparents and great-grandparents did?”

He pointed out that the current services and social norms of today’s aging culture will not be as acceptable to the wave of baby boomers. “Think about the disruptive demographics of an aging society – it’s a new generation gap,” he said. “It’s a generation of new expectations to live longer and to live better.”

For example, technology is already making it possible for people to live longer and better at home – appliances are getting smarter and more connected and more proactive. Retail pharmacies are becoming more of a force in health services – not just for flu shots, he said, but in helping people manage chronic disease. New professions will emerge as the workforce adapts to developing and managing forward-thinking technologies and care delivery systems.

AARP’s Jo Ann Jenkins said that being older is becoming the new normal. She discussed the “new” retirement – with people turing 50 today expecting to live another 30 or more years, the challenge is to make sure the next phase of their lives is productive, healthy, and satisfying. “By 2030, one in every three Americans will have reached the age of 50 and 10,000 people a day are turning 65,” she said. “We are quickly approaching a time when people 65 and older will outnumber children 15 and under for the first time in history.”

Jenkins predicted that baby boomers will be the transformative generation that changes aging. “Millions of boomers are realizing that they’re not really done yet,” she said. “We have to help society adapt to the millions of boomers who are entering this new life stage.” We have to adapt our social institutions, public policites, our communities and many of our social structures to make them work for the 21st century life cycle.” She noted that women tend to live longer than men, are are more likely to live alone and be isolated. They’re also more likely than men to be caregivers. “So who will care for the women when they need care especially since we know there will be a shortage of caregivers in the future?”

Torres-Gil remains optimistic and believes the pendulum will swing. “There will come a point where the public will recognize that we must renew the social contract so that there won’t be the social and generational inequities that we now face.”

He said that caregiving and the desire to live independently should lead everyone to question who will take care of them when they get older and can no longer care for themselves? He said that is the question that he hopes will get public and political support to renew that social contract.

Dychtwald challenged the audience to build bridges to our new multi-generational, multiethnic, multicultural societies. “Become leaders in shaping aging’s future, or others will steer the ship. Others with less of a stake in the outcome.”