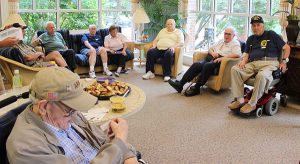 Participants in a dental benefit plan for U.S. military retirees will need to take action soon to hold onto coverage.

The TRICARE Retiree Dental Program (TRDP), which now covers 1.6 million military retirees and family members, is shutting down at the end of the year. END_OF_DOCUMENT_TOKEN_TO_BE_REPLACED

While preparing for a veterans health panel I moderated at the recent AHCJ conference in Atlanta, I remembered an article in the Journal of the American Medical Association that AHJC’s Pia Christensen had sent me on what the health reform law would do for veterans. It’s behind a pay wall, but AHCJ members get free access. It’s written by Kenneth Kizer, who is at the University of California, Davis, but used to run the Veterans Health Administration (better known as the VA) – which is the nation’s largest health care system – when he was under secretary for health in the Department of Veterans Affairs.

There are more than 22 million veterans and the number is obviously growing. About one-third (37 percent in 2011) were enrolled in the VA, which usually means they either have a service-connected disability and/or are low income. Most (80 percent) are covered by Medicare starting at age 65. Most have some kind of coverage or mix of coverage (private insurance, Medicaid, or TRICARE, which also covers military retirees and their dependents). Only about 7 percent – well under the national average and most states’ rates – are uninsured, which in most cases means they are poor but not poor enough to get into the VA.

The Affordable Care Act (assuming it survives the Supreme Court) doesn’t affect the VA per se – although one could argue that some of the VA’s initiatives on care coordination and its early adoption of electronic medical records did affect the shape of the ACA. But not affecting the VA doesn’t mean it won’t affect veterans. Kizer expects that to be a mixed blessing.

For that 7 percent who are uninsured (and for those who may be paying a lot for insurance that may or may not be comprehensive in the individual or small group markets) the coverage expansion could make a big difference. Some may qualify for the expanded Medicaid. Other will be able to get insurance, often with a federal subsidy, in the new state-based insurance exchanges. And that’s a gain.

Those options will be open, too, to some veterans who are VA eligible. This is where Kizer argues the benefits aren’t so clear cut. On one hand, it gives veterans more choices, and they may be able to get care that is more convenient and timely. The drawback, though, is the care may be more fragmented and disconnected once they venture outside the VA’s closed system of coordinated care.

“Fragmentation of care is of concern because it diminishes continuity and coordination of care, resulting in more emergency department use, hospitalizations, diagnostic interventions, and adverse events. The VA serves an especially large number of persons with chronic medical conditions or behavioral health diagnoses – populations especially vulnerable to untoward consequences resulting from fragmented care,” Kizer wrote.

There is even some data suggesting that vets who get some care in the VA and some outside are more likely to be rehospitalized and die within a year than VA-only users, although the data is limited. The new choices by expanded coverage options could also mean more veterans end up getting care outside the VA system – from doctors who may not be as well-versed in the medical problems prevalent among vets (including PTSD) or the resources available to help them. There could be some good local stories on this aspect – and on the broader issue of whether mental health providers in the community are plugged into the needs of veterans, whether or not they are eligible for the VA itself.

There are also a bunch of questions about financing – and these too are worth a local look. If more vets seek care outside the VA, will that mean that some low-volume rural VA services will be cut back? How will that affect the remaining vets who want to get those services from the VA? Will coverage expansion in general – not just for vets – lure more doctors and nurses and physical therapists etc out of the VA to meet the higher demand for health providers among the newly insured? And will the increased options for vets cost the government money? For instance, the government may be making redundant payments now – think about a vet over age 65 who gets some care in the VA and is also enrolled in a government-subsidized Medicare Advantage plan, or is a dual-eligible getting subsidized Medicare, Medicaid – and VA care. Will this kind of duplicative payments rise if vets get subsidized coverage through Medicaid or the exchange – and also draw on VA services? Is anyone in your state even thinking about this? Kizer suggests research needs to be done on this, and says Florida, Texas and California – together home to nearly one in four vets – would be good places to start.

He raises other questions about the health care work force, the safety net, the oft-neglected needs of women vets but concludes with a call to recognize that “providing health care for veterans is an ongoing cost of foreign policy foreign policy and national defense strategies and that the nation has a long-standing social contract with veterans to ensure that those who have experienced harm during military service have ready access to health care.”

Reporting for KIRO-Seattle, Chris Halsne used FOIA requests to find out how much the military’s TriCare plan is paying for weight-loss surgeries for soldiers and their dependents. Including post-surgery tummy tucks, Halsne calculates (PDF) that the government was on the hook for at least $362,971,831 for such procedures over the past decade.

The military defends the expenditures by pointing to the long-term savings of having healthier TriCare enrollees, though Halsne found those savings difficult to prove, as 86 percent of soldiers and their families leave the plan before they qualify for lifetime benefits.

Halsne found that even some active-duty personnel are getting bariatric procedures, which are officially off limits to them as they are required to stay fit through diet and exercise to remain in the military.

While analyzing Defense Department records on health-related costs, KIRO Team 7 Investigators also discovered the military continues to pay for some weight loss surgery for active duty personnel. Records show $2,400,000 worth since 2001. The military banned bariatric procedures for active duty soldiers and sailors in 2007, yet it appears they approved around 57 of them after that.

After a lengthy investigation, ProPublica’s T. Christian Miller and NPR’s Daniel Zwerdling found that, in their words, the “battle over science and money has made it difficult for wounded troops to get a treatment recommended by many doctors for one of the wars’ signature injuries.”

They’re writing, of course, about traumatic brain injury, a consequence of roadside bombs in Afghanistan and Iraq. Their work revolves around a method of treating TBI and rehabilitating victims that has gained wide acceptance among civilian physicians and health plans but has not been embraced by the military’s insurance provider.

During the past few decades, scientists have become increasingly persuaded that people who suffer brain injuries benefit from what is called cognitive rehabilitation therapy — a lengthy, painstaking process in which patients relearn basic life tasks such as counting, cooking or remembering directions to get home.

Many neurologists, several major insurance companies and even some medical facilities run by the Pentagon agree that the therapy can help people whose functioning has been diminished by blows to the head.

Tricare provides health insurance for about 4 million active duty and retired soldiers, and “despite pressure from Congress and the recommendations of military and civilian experts,” it still refuses to cover cognitive rehabilitation therapy for the thousands of American soldiers afflicted by TBI.

Five of the 12 largest insurers cover the therapy, and an expert panel has recommended that the military do the same.

For its part, Tricare points to an assessment it conducted that put the effectiveness of cognitive rehabilitation therapy into doubt. I’ll let Miller and Zwerdling take it from there.

An investigation by NPR and ProPublica found that internal and external reviewers of the Tricare-funded assessment criticized it as fundamentally misguided. Confidential documents obtained by NPR and ProPublica show that reviewers called the Tricare study “deeply flawed,” “unacceptable” and “dismaying.” One top scientist called the assessment a “misuse” of science designed to deny treatment for service members.

The therapy would cost $15,000 to $50,000 per soldier, and the reporters found that, in private, Pentagon officials had expressed concerns about the massive cost of providing it to every suffering soldier. A few soldiers with political connections or ultra-motivated family members have managed to get the therapy, but its essentially off limits for most folks covered by Tricare.

Finally, a quick parenthetical mention answers a question that most health reporters are asking at this point. How did they get those internal studies and documents?

HINT: It involved finding a slightly less formal way to fulfill some of their FOIA requests.