While the Chinese government says the outbreak, which began on Dec. 12, hasn’t resulted in any deaths, the strange illnesses are a cause of concern because China was the epicenter of SARS (severe acute respiratory syndrome) in 2003. SARS sickened 3,100 people and killed 774 in 37 countries in less than a year. END_OF_DOCUMENT_TOKEN_TO_BE_REPLACED

More than five million children around the world die before the age of five from infectious diseases like pneumonia, malaria and measles, and scientist John Aitchison wants to talk to journalists about his work to reverse that trend.

“We can help journalists with the significance or size of an issue and provide understanding of why a disease is hard to cure or treat,” says Aitchison, whose organization, the Center for Infectious Disease Research (CIDR) announced plans in July 2018 to merge with the Seattle Children’s Research Institute. END_OF_DOCUMENT_TOKEN_TO_BE_REPLACED

View all posts by Sally James → 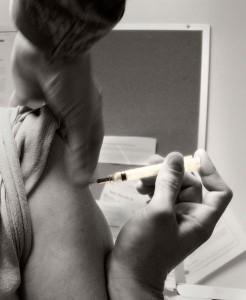 The season of coughing is around the corner. Ads for flu shots and other vaccinations are getting thicker too. Vaccinations for older adults have new developments this year. A great place to start is this tip sheet from Eileen Beal.

Herd immunity: When writing about vaccines for a certain age group, remember that your audience is not just that group. Communities are protected by the entire immunity of their neighbors and friends. Elders housed in assisted living or nursing homes are at special risk. But college student volunteers, visitors, and grandchildren may need to read your story to avoid unwittingly exposing these older adults. This works backwards also. Older adults who lack up-to-date immunization for whooping cough (pertussis) can expose a newborn when Grandma and Grandpa visit. The booster that many may need is called T-DAP. END_OF_DOCUMENT_TOKEN_TO_BE_REPLACED