Alice Miranda Ollstein is a health care reporter for POLITICO, covering the Capitol Hill beat and reproductive health. Prior to joining POLITICO, she covered federal policy and politics for Talking Points Memo. 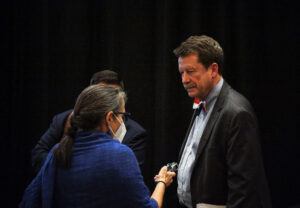 During a Q&A on Friday, April 29, at Health Journalism 2022 in Austin, he told journalists that after “surviving a harrowing confirmation process” he’s feeling confident about the FDA’s ability to tackle all of the challenges before it, including food safety, children’s COVID vaccines, teen vaping, among others.

Though the agency has been hit with criticism from lawmakers, industry and the public, he’s taking it in stride.

“I’m 70 years old. I’m relatively impervious to critique. What are they going to do to me now?” he said during the session moderated by AHCJ’s core topic leader on patient safety Kerry Dooley Young.

But the issue that keeps him up at night, he said, is the proliferation of false and misleading health information, particularly online — and the distrust in institutions, data and expertise that it has wrought.

“I believe that misinformation is now our leading cause of death,” he said, naming ongoing COVID-19 vaccine hesitancy, the number of people taking Ivermectin and the prevalence of vaping as examples of the problem. “Historically, the FDA has been relatively quiet and puts out definitive information through guidance or labels or regulatory actions … that would be transmitted to consumers and patients through trusted intermediaries. But the world has changed at this point.”

All this, he argued, had fueled the drop in life expectancy in the U.S. compared to other wealthy nations, and he urged reporters to avoid clickbait, lean into fact checking, make sure the headline matches the copy and take other steps to responsibly convey news about COVID-19 and other pressing health concerns.

“People are distracted and misled by the medical information Tower of Babel,” he said. “But journalists like yourselves play an important role here and your work has a tremendous impact on public trust.”

Following his opening remarks, Califf took questions from several AHCJ members about a range of newsy issues on the FDA’s plate like the controversial approval of an Alzheimer’s drug, the rise in opioid-related deaths and the ongoing struggle to authorize a COVID-19 vaccine for young children.

When asked about the apparent disconnect between FDA approving the drug Aduhelm to treat Alzheimer’s — despite weak evidence of its efficacy — and CMS refusing to cover the pricey medication — Califf disputed that the different agencies were at odds.

“It wasn’t a contest between FDA and CMS. We have different jobs,” he said. “CMS has a standard for what it will fund and it’s not the same as an FDA approval.”

While refusing to give his own opinion on the decision to approve the drug, he voiced some skepticism about the independent FDA panels that said Aduhelm should not get a green light.

When asked whether the Biden administration will grant requests from Florida and other states to import cheaper drugs from Canada, Califf said that while he thought it was a poor way to get at the root problem of high drug prices, his personal view is “irrelevant.”

“FDA is like a referee and the referees go by the rulebook,” he said. “If a state meets the criteria that are in the rules, we’ll act quickly to approve them … and come up with a system that goes by the criteria laid out not by me but by my predecessors.”

Still, he stressed, a better solution is to adopt the direct government negotiation system Democrats have been struggling to pass through Congress.

“The way to get a lower price is to negotiate with the person selling them,” he said.

Alice Miranda Ollstein is a health care reporter for POLITICO, covering the Capitol Hill beat and reproductive health. Prior to joining POLITICO, she covered federal policy and politics for Talking Points Memo.