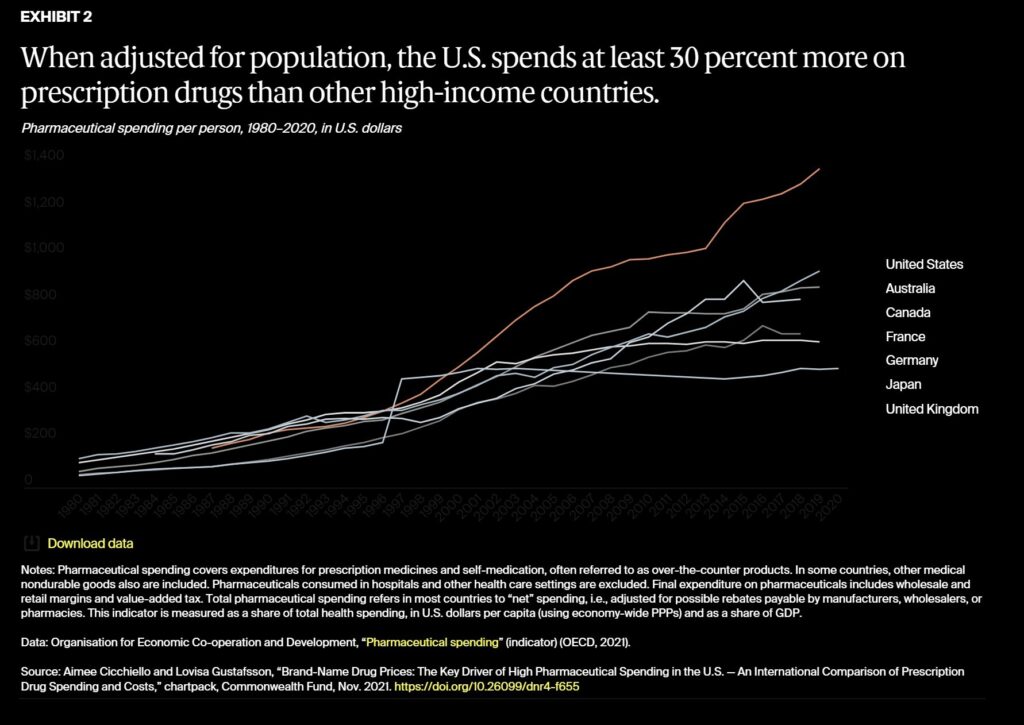 Last week, when the U.S. House of Representatives passed and sent to the U.S. Senate H.R.5376, the Build Back Better Act, speculation began on which parts of the bill would survive a vote in the senate.

For journalists covering the health care elements in the bill (including provisions that would affect what consumers pay for prescription drugs), the question of which parts will remain will require following the money. As we’ve seen in recent years, the health care industry has spent multiple millions of dollars on lobbying and advertising to get members of Congress to water down various parts of the bill they don’t like.

Reporting on spending for advertising and lobbying shows how much the pharmaceutical industry has spent in Congress to weaken provisions designed to make health care and prescription drugs more affordable for consumers.

Among the angles to cover in this story are how much money members of Congress in your district or state have received from pharmaceutical companies. One way to identify how much members of Congress have received is to use the Pharma Cash to Congress database from Kaiser Health News. This data set shows who’s received the most money this cycle, who’s in the million-dollar club and how much each member has received, and from which pharma companies.

Other angles to cover include how some of the advertisements from pharmaceutical companies can mislead consumers and how some consumers have been affected by high costs for prescription drugs. To find consumers willing to discuss high prescription drug costs, call patient-advocacy organizations such as Patients for Affordable Drugs and the Leukemia and Lymphoma Society.

When covering this story, keep in mind two reports that came out this year: In U.S., an Estimated 18 Million Can’t Pay for Needed Drugs, from Gallup in September; and, Prescription Drug Prices in the United States Are 2.56 Times Those in Other Countries, from RAND in January.

Since some of the provisions in the Build Back Better Act are designed to make pharmaceuticals more affordable for consumers, prescription drug companies have spent heavily to oppose any effort to limit what consumers spend on medications.

At Time magazine, Nik Popli and Amy Vesoulis have a thorough review of the health care and drug-price provisions in the bill, including $165 billion to boost health insurance premium tax credits for the uninsured and to close the Medicaid coverage gap. Closing the coverage gap would allow uninsured consumers in the 12 states that have not expanded Medicaid enrollment to gain health care coverage without paying a monthly premium, they wrote. The bill also includes $150 billion for a Medicaid program that supports in-home health care, they added.

More on the Build Back Better Act

The drug-price provisions have drawn the most spending from drugmakers because the bill includes a provision that would restrict how many pharmaceutical manufacturers can increase prices each year and sets an annual limit on out-of-pocket spending, but only after those drugs have been on the market for about a decade, Poli and Vesoulis explained. Drug companies will still be able to charge enormous amounts for new drugs because price regulation for most common medications won’t take effect for many years, they said.

Starting in 2023, the bill also would limit out-of-pocket costs for consumers buying insulin to $35 for a 30-day supply. In January, Joshua Cohen reported at Forbes that the most recent versions of insulin cost $175 to $300 a vial and patients with diabetes need two to three vials or more per month.

Given that pharma companies oppose these provisions, Kris Van Cleave, who covers Congress for CBS News, reported early this month on how the pharmaceutical industry has spent $263 million so far this year on lobbying. Citing data from OpenSecrets, he noted that drug makers have three lobbyists for every member of Congress and that much of the spending goes into making campaign donations. The nonpartisan and nonprofit OpenSecrets tracks money in politics and its effect on elections and public policy.

At OpenSecrets, Ariel Gans reported that the health care industry has spent the most every quarter for three years among all industry sectors that the nonprofit tracks. “This quarter, the sector added $160.8 million for a $498.9 million 2021 lobbying total,” she wrote.

One way the pharmaceutical industry spends its money is on advertisements to mislead the public. Earlier this month, Yeganeh Torbati and Jonathan O’Connell reported on this effort for The Washington Post. The ads were part of months-long lobbying and political donation blitz from the pharmaceutical industry and its allies to kill provisions to let the federal government negotiate drug prices, they wrote.

Earlier in the year, the health insurance trade group, America’s Health Insurance Plan, spent the most it had ever spent on lobbying against proposals to establish a public health insurance option, such as Medicare for all, that would compete against health insurance companies, as Jessie Hellman reported for Modern Healthcare.

For a thorough review of the significant prescription drug proposals in the Build Back Better Act, see a report that KFF issued on Tuesday: “Explaining the Prescription Drug Provisions in the Build Back Better Act.” For their analysis, KFF’s researchers outlined how the bill would allow the federal government to negotiate prices for some high-cost drugs covered under Medicare parts B and D. And the report addresses provisions that would tie rebates to inflation and limit annual increases in drug prices in Medicare and private insurance, that would eliminate cost-sharing for adult vaccines under Part D, cap out-of-pocket costs under Part D and repeal a drug rebate rule implemented under the Trump administration.