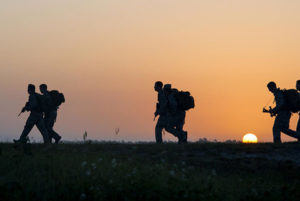 But the two are increasingly intertwined, as my former San Diego Union-Tribune colleague and Pulitzer Prize winner David Hasemyer points out. He documents in his series of stories for InsideClimateNews a disturbing link between rising global temperatures and numbers of heat-related deaths and serious illnesses such as stroke, in our military forces.

Hasemyer’s new “How I Did It” piece provides a detailed step-by-step on how journalists can find out about heat-related deaths at their regional bases, lists great data sources and public relations representatives, and provides a lot more helpful information.

His stories are excellent:

The growing link between climate change and health care was also apparent during the American Medical Association’s interim meeting in San Diego Nov. 16-19, which MedPage Today asked me to cover.

During a special session, three physicians who are climate experts admonished their physician audience that they have a moral obligation to convince their fellow practitioners and their chief executive officers that their industry contributes a lot of avoidable pollution, in waste and greenhouse gases, and that the health care system can and should work quickly to reduce.

Some of the speakers also advised physicians to use their influence and trust to persuade climate change deniers among their patients that the impacts from global warming on the planet are real.