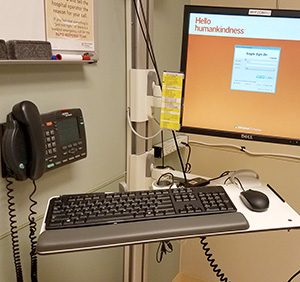 After a five-month hiatus as Health IT topic leader for AHCJ, I’m happy to be back.

My absence was bookended by two must-read articles on the promise, limitations and hidden dangers of electronic health records (EHRs).

Last November, The New Yorker published Atul Gawande’s first-person account of learning to use the EHR system at the health system where he practices medicine. You can guess how it went by reading the headline: “Why Doctors Hate Their Computers.”

Gawande writes, “…three years later I’ve come to feel that a system that promised to increase my mastery over my work has, instead, increased my work’s mastery over me. I’m not the only one.”

Coinciding with my return to AHCJ, on Monday Fortune magazine published “Death by a Thousand Clicks: Where Electronic Health Records Went Wrong.” The article is the product of a three-month investigation by Fred Schulte, senior correspondent at Kaiser Health News, and Fortune reporter Erika Fry.

Their article describes EHRs as a $36 billion “digital revolution gone wrong.” Federal incentives for hospitals and physician practices to adopt EHRs led to near universal implementation. But EHRs have created serious patient safety problems and accelerated physician burnout, they write.

It’s “a trouble-prone industry that intersects, in the most personal way, with every one of our lives,” Schulte and Fry write. Adding to the picture are “entrenched secrecy policies that continue to keep software failures out of public view.”

The average ER doctor makes more than 4,000 mouse clicks over the course of one shift, said one physician quoted in the article. “The interfaces are just so confusing and clunky,” said the physician. “They invite error … it’s not a negligence issue. This is a poor tool issue.”

In The New Yorker article on EHRs, Gawande interviews medical scribes, who shadow physicians and do much of the data entry required to practice medicine today.

“This fix is, admittedly, a little ridiculous,” writes Gawande. “We replaced paper with computers because paper was inefficient. Now computers have become inefficient, so we’re hiring more humans.”

Both articles are excellent. They advance the debate on the pros and cons of EHRs. They also show that health IT is a rich beat, with great stories yet to be told.