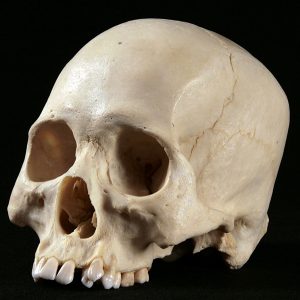 Photo: North Carolina School of Science and Mathematics via Flickr

In the wake of California’s latest spate of devastating wildfires, teams of forensic specialists have faced the grim task of assigning names to victims whose remains are brought to the morgue in Sacramento from the site of the Camp Fire in Butte County.

Sometimes, the specialists have mere fragments of the dead to work with. And sometimes those fragments are teeth, or bits of dental crowns or fillings.

That is when the skills of Jim Wood, a forensic odontologist, are particularly useful. Wood, a former family dentist, uses specialized training to identify bodies by reading the unique clues found in teeth and dental records, explained Laurel Rosenhall in a recent feature story for CALmatters, a nonprofit news organization that focuses on politics and policies in the state of California.

“Wearing a white lab coat and rubber gloves, Wood arranges the dental remains on a big examination table,” Rosenhall wrote. “After he reconstructs a mouth, the next phase of detective work begins: Gathering dental X-rays and other records of people on the missing persons list, and matching those images to the remains in the morgue.”

The vast destruction wrought by some of California’s fires have made the job particularly challenging, Rosenhall noted.

“It’s been difficult, Wood said, because many dental offices in Paradise burned up in the fire, and with them, the records that could help identify victims. But he’s scouring other sources for X-rays that were saved electronically,” she wrote. In the story, a local law enforcement official credited Wood with solving some very difficult cases, in spite of the odds.

“He’s magic in what he does in helping us identify people,” the official told CALmatters.

Wood’s response to devastation does not end at the doors of the morgue. He also is a Democratic state assemblyman from Sonoma County, which experienced deadly fires in 2017. In that role, he has taken a lead in efforts to develop policies that could help prevent new disasters, Rosenhall explained.

“During the hearings, Wood didn’t publicly discuss his work identifying constituents who died in the brutal flames. But at one point in a late July hearing, he lost his patience,” Rosenhall noted.

“I don’t want to be here five years from now, when millions more acres may have been burned in California and many, many more lives have been lost, wondering what the heck were we doing. So I apologize for my passion. But … this is my district. This is where 44 of my constituents died and I don’t want to see any more die.”

Rosenhall wrote in her story that, over the years, Wood’s training as a forensic odontologist has taken him across the country, helping identify victims of other major disasters, including Hurricane Katrina and the 9/11 attack on New York.

A systematic review, published last year in PloS One, concluded forensic odontologists have made significant contributions in identifying victims in mass disasters across the world.

The science supporting the use of forensic odontology for the identification of human remains is “well established,” the authors of a major National Academy of Sciences survey affirmed in 2009.

But the usefulness of another application of forensic odontology has faced significant challenges.

The questions have focused upon the reliability of bite-mark identification – a practice that seeks to match bite marks in the flesh of victims with the dentition of suspects in violent crimes.

In a 2017 essay in the Washington Post, author and journalist Radley Balko offered additional insights into the bite-mark identification debate.