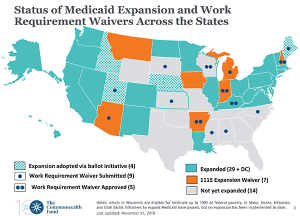 The Commonwealth Fund’s Sara R. Collins, Ph.D., vice president for health care coverage and access, walked us through the prospects for Medicaid expansion and the ongoing controversy over work requirements in a recent webcast for AHCJ members. (The recorded webcast and her slides are here.)

Collins noted that the November midterm election changed the odds of expansion in at least six states – the three that approved ballot initiatives on expansion (Utah, Nebraska and Idaho) and three that elected pro-expansion Democratic governors to succeed Republicans (Kansas, Wisconsin and Maine.) In Kansas and particularly Wisconsin, the state legislature remains an obstacle. In Maine, the voters had already strongly approved a ballot initiative but outgoing Gov. Paul LePage had fought it. Maine should go through relatively quickly now.

If all six states expanded (and all six are not likely, immediately). 300,000 people could get covered. And probably the publicity around enrollment and expansion would increase the number of people – already eligible but not enrolled– signing up for traditional Medicaid as well. That’s sometimes called the “woodwork effect.”

That still leaves 12 states not moving toward expansion (although Mississippi may be taking some baby steps, my colleague Paul Demko reported in December.) And in those states, two million people are left in the Medicaid coverage gap, ineligible for either the traditional Medicaid program or for subsidized coverage in the ACA exchange.

In the states moving toward expansion, adding work requirements may be part of the debate, or the eventual political compromise. As Collins noted, “The Trump administration has encouraged states to make work a condition of enrollment.” At the time of her webinar, Kentucky, Arkansas, Indiana and New Hampshire had been approved, though only one, Arkansas, had actually begun implementing the work requirement. Several others were pending. (Read more about how Arkansas is cutting off coverage for thousands of people because of the work requirement here.)

Kentucky’s expansion has been halted by a lawsuit, for now. A similar lawsuit is pending in Arkansas – and is likely to go before the same judge, Collins noted. “The legality of the waivers continues to be pretty much in question at this point,” she said. She also pointed out that the states with approvals had not submitted evaluation plans to CMS – except Arkansas, and its proposal for evaluation had not yet been approved.

Collins also took on some of the arguments that have been made against Medicaid expansion. State fears that expansions would be economically untenable have been disproven. “The evidence shows they have not been big budget breakers” – and expansion states have seen their uninsurance rates drop more than in non-expansion states. There’s also mounting evidence that Medicaid is improving access to health care, and reducing financial burdens. And self-reported health status of people getting Medicaid has improved – a strong predictor of mortality she said.

Collins also talked about ACA enrollment – which was at the time lagging sharply behind the prior year. It ended more strongly than many had expected.