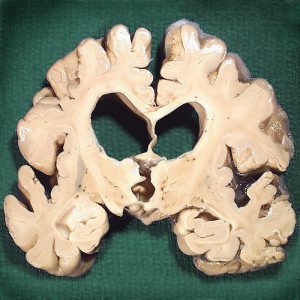 You may have recently heard about the multimillion-dollar donation that Bill Gates and Leonard Lauder made to support research into biomarkers for early detection of Alzheimer’s disease and related dementias.

The Diagnostics Accelerator initiative is part of the Alzheimer’s Drug Discovery Foundation’s (ADDF) effort to speed diagnosis and develop drugs that can prevent, treat, and cure the disease. Lauder was an ADDF co-founder.

Over the next three years, the two philanthropists, along with the Charles and Helen Schwab Foundation, the Dolby family and other donors, will contribute about $30 million in grants to researchers working on innovative ideas to help detect the disease earlier. This news was among several recent major announcements that have renewed optimism about finding ways to diagnose and treat a disease which affects 5.7 million people in the United States and about 50 million people globally. These numbers are projected to rise as people around the world are able to live longer.

Gates explained his thinking in a lengthy blog post, noting that his father’s diagnosis of Alzheimer’s increased his interest in the disease.

A significant challenge for drug developers is the lack of biomarkers that can be used for non-invasive testing. Biomarkers had help identify specific patients who may benefit from early diagnosis and certain tailored therapies, similar to the screening given many cancer patients. “Ultimately what we want to do is have a blood test for Alzheimer’s,” said Howard Fillit, M.D. ADDF’s founding executive director and chief science officer.

“A blood test would really change the clinical paradigm, especially in how primary care physicians diagnose patients,” Fillit said in a phone interview. There is a large void in how patients now are diagnosed in the community. Amyloid scans are not readily available in practice, cost about $5,000 each and are not reimbursed by payers.

“If we got to the point where we could have a blood test, it would really change the landscape for Alzheimer’s disease,” he said. “Not only would patients get better care, but we’d ramp up the percentage of those who are diagnosed properly and a percentage of those would be eligible to enter into clinical trials.”

Another piece of promising news, announced during the Alzheimer’s Association International Conference in Chicago, was Phase 2 clinical trial data for a drug under development by Biogen and Japanese drugmaker Eisai. When taken in high doses, BAN2401 was shown to remove amyloid plaque from the brains of Alzheimer’s patients and appeared to slow decline in memory and thinking of those in the early stages of dementia by as much as 30 percent. The mid-stage trial included 856 patients and only the highest doses showed success, as Stat News pointed out.

As The New York Times reported, the drug still has to undergo larger Phase 3 clinical testing, so many researchers, while cautiously optimistic, are taking a wait-and-see approach.

“I think it’s more than a hope,” said Fillit, who also is a clinical professor of geriatric medicine, palliative care medicine and neuroscience at Mt. Sinai School of Medicine in New York City. “The drug worked, so it did what it was supposed to do, remove the amyloid from the brains of patients.”

He added, “The patients really improved, based on three different sets of screening instruments. So you have validation in the clinic, and the results were significant for every time point. It was pretty impressive.”

Another study reported at the conference further suggests that aggressive management of high blood pressure may significantly reduce the risk of mild cognitive impairment (MCI) and MCI/dementia. New research results from the federally-funded SPRINT MIND Study (Systolic Blood Pressure Intervention Trial and Memory and Cognition IN Decreased Hypertension), a large-scale, long-term clinical trial, showed for the first time that keeping the systolic (top number) to less than 120mm Hg reduced new cases of MCI alone, and the combined risk of MCI plus all-cause dementia, researchers said.

While a statement from the Alzheimer’s Association says the results show potential for reducing MCI and dementia risk through the treatment of high blood pressure (also one of the leading causes of cardiovascular disease worldwide), this Forbes article viewed the study with caution.

“Unless you look very carefully at the news reports and ‘expert’ statements you won’t know that SPRINT MIND was a negative trial that missed its primary endpoint or that the results have not yet been peer reviewed,” Forbes contributor Larry Husten noted in the piece.

I asked Fillit about recent headlines that attempt to link seemingly disparate factors with Alzheimer’s risk. “You can show association, but you can’t prove causality,” he said. “When looking at common things you’re going to see associations, but it doesn’t mean it’s a contributing factor.” He encouraged journalists and others interested in learning more about debunking myths and understanding evidence to read and research these studies carefully.

ADDF created the Cognitivevitality.org website to educate consumers about the evidence, benefits, and safety profiles of dozens of studies and claims. “We have to make a better effort at educating readers on what kind of evidence is being presented, and what it means,” Fillit said.

Journalists: AHCJ’s Medical Studies topic area also is a useful resource for learning more about clinical evidence and how to use studies and data to improve your reporting.

Note: In addition to his above-mentioned roles, Fillit currently or has previously served on the boards of, or consulted for, several pharmaceutical, research and biotechnology companies. More information is available in this Bloomberg profile. Additionally, as we point out, the BAN-2041 trial achieved some success at highest doses after 18 months, but did not meet the study’s first goal of improvement at 12 months.  The linked articles above describe the “cautious optimism” of researchers in more detail.