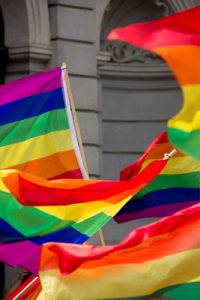 Aging and health issues facing lesbian, gay, bisexual and transgender baby boomers have often been ignored by services, policies and research. However, these seniors face higher rates of disability, physical and mental distress and a lack of access to services, according to a new study on aging and health in these communities.

An analysis by a University of Washington researcher concluded that prevention and intervention strategies must be developed to address the unique needs of these seniors, whose numbers are expected to double to more than four million by 2030.

“The higher rates of aging and health disparities among lesbian, gay, bisexual, and transgender older adults is a major concern for public health,” according to author Karen Fredriksen-Goldsen, professor at the University of Washington’s School of Social Work. “The health disparities reflect the historical and social context of their lives, and the serious adversity they have encountered can jeopardize their health and willingness to seek services in old age,” she said in a statement.

LGBTQ adults face unique circumstances, such as fear of discrimination. Many do not have children to help them in older age. Senior housing, transportation, legal services, support groups and social events were the most commonly cited services needed in the LGBT community, according to the study. LGBTQ older adults are generally an underserved and understudied population, yet, by 2060 their numbers will exceed five million, and will account for more than 20 million older adults, including those who do not publicly self-identify but have engaged in same-sex sexual behavior, or romantic relationships, and/or are attracted to members of the same sex. Much of this increase is fueled by millennials, according to this Gallup poll.

Fredriksen-Goldsen and her team surveyed 2,560 lesbian, gay, bisexual and transgender adults aged 50-95 across the United States. They found participants had greater rates of disability, depression and loneliness and increased likeliness to smoke and binge-drink compared with heterosexuals of similar ages. The Williams Institute on sexual orientation at UCLA has a helpful interactive map of LGBTQ data and demographics.

LGBTQ seniors are also at greater risk for social isolation, putting them at greater risk of mental and physical health problems, chronic conditions and even premature death, as this CityLab story details. Histories of victimization and discrimination because of sexual orientation or gender identity also contribute to poor health, according to a Kaiser Family Foundation issue brief.

Adults in the study were more likely to live alone and less likely to be partnered or married than heterosexuals, which may result in less social support and financial security as they age. Eighty percent of participants had been victimized at least once during their lifetimes, including verbal and physical assaults, threats of physical violence and being “outed,” and damaged property. Twenty-one percent of respondents said they were fired from a job because of their perceived sexual orientation or gender identity. Nearly four out of 10 had considered suicide at some point.

Twenty-one percent of those surveyed did not tell their doctors about their sexual orientation or gender identity out of fear of receiving inferior health care or being turned away for services, which 13 percent of respondents had endured. Lack of openness about sexuality “prevents discussions about sexual health, risk of breast or prostate cancer, hepatitis, HIV risk, hormone therapy or other risk factors,” Fredriksen-Goldsen said.

The good news? LGBT older adults are building their communities, like this new residential housing project under construction in Fort Greene, Brooklyn. Others are committed to participating in community diversity events, as the Santa Cruz Sentinel reported.  And rural LGBT elders are taking action with potlucks and discussion groups to reduce the sense of isolation, as this Next Avenue story describes. Even nursing homes are becoming more LGBT friendly, reports The New York Times.

Social connections are key, the study noted because, unlike their heterosexual counterparts, most lesbian, gay, bisexual and transgender seniors rely heavily on partners and friends of similar age to provide assistance as they age. While social ties are critical, there may be limits to the ability of those older adults to provide care over the long-term, especially if decision-making is required for the older adult receiving care, according to Fredriksen-Goldsen.

Journalists may want to explore various social supports for older LGBTQ adults, including housing options, targeted programs, activities, and training options for health care workers, from physicians to home health aides. Has anything changed under the Trump administration?