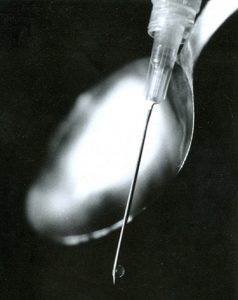 For Heather Wolford, a reporter for the Cumberland Times-News, covering the growing opioid crisis in the rural hills of Western Maryland was, quite literally, a calling.

Now two years into her health coverage of the epidemic, Wolford was driven by a journalist’s instinct to find out what was happening in her community, from those using the drugs, police officers and government officials, to family members on all sides of the crisis.

“When I repeatedly heard daily overdose calls over the office scanner, I asked my boss if I could dive into the crisis,” she said.

Wolford spent two weeks learning all she could and produced a series of stories on the Cumberland area’s struggles with heroin; a scene played out across many other swaths of America.

“The series received an overwhelming response from the public, both good and bad. But mostly good,” Wolford said in an email interview. “The majority of people felt relieved. The public no longer had to carry the burden silently.”

Since then, she has continued to expand on her efforts, becoming the community’s go-to resource when it comes to news of the area’s grappling with the crisis.

“The most difficult part was asking my boss if I could start digging into the issue,” she said. “Thankfully, the request was met with ‘go for it!”

Wolford, who also is an AHCJ Regional Fellow this year, has prepared a tip sheet to help other reporters investigate the opioid crisis and other drug and addiction issues in their communities. She highlights how leveraging social media and similar methods of getting her name and interest on the issue before the public has helped build their trust on this sensitive issue.

“I do my best to humanize the issue,” she said. “Opioids and drug addiction cross all socio-economic boundaries, so I work to expose that. Also, I talk to everyone the same. Not as though they are a statistic.”