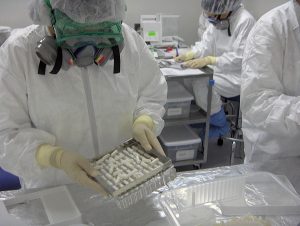 The death of musician Glen Campbell on Aug. 8 after a very public struggle with Alzheimer’s disease has again focused attention on whether science will ever find a drug that truly halts this devastating condition.

Deaths from Alzheimer’s are increasing, according to the nonprofit advocacy group UsAgainstAlzheimer’s. The organization, which has the goal of stopping Alzheimer’s by 2020, lobbies legislators to increase research funding. Some 35 drugs are in various phases of clinical trials. But as this excellent Pacific Standard article reports, the goal of a cure by 2020, or 2025, is iffy at best.

In addition to drug trials, dozens of non-pharmacologic studies are also underway — examining the effects of diet, exercise, sleep, and other factors on the disease. While many look promising, the sheer number of studies also begs the question of how to report on scientific discoveries without providing false hope to desperate patients and families.

Some of the more interesting trials underway through the National Institute on Aging, and at various academic institutions, include:

The challenge in reporting on potentiall promising advances is what happens when results don’t go as hoped. In 2016, several Alzheimer’s drugs in Phase III trials failed, including TauRx’s LMTM. As Science Magazine reported in February, Merck pulled the plug on its EPOCH trial for the BACE inhibitor verubecestat for mild- to-moderate Alzheimer’s after the external data monitoring committee concluded that the drug was a bust, with “virtually” no chance of success.

This WSMV-TV story in Nashville does a pretty good job of explaining that human trials are still a few years away for one drug. But the term “promising,” left me wondering what that exactly means to their audience. By contrast, this ABC15-TV story in Phoenix, teases “a cure for Alzheimer’s,” without even bothering to qualify it with a question mark.

Reporting for more technical/scientific publications also poses challenges. Cosmos Magazine, geared for a sophisticated reader, doesn’t get into much detail about the basics of mouse studies or the preliminary nature of Phase I trials.  They assume the reader knows this already. The writer strikes a good balance by quoting an outside expert on the importance of the research for framing purposes. It goes back to basic journalism: understanding who your audience is. Don’t talk down to them but don’t talk over them, either.

For more perspectives on Alzheimer’s drugs, check out this video from The Motley Fool, which looks at the history behind the high failure rate in drug development for this disease. A recent guest column in the Las Vegas Review Journal helps explain (in reader-friendly language) why the rate is so high.