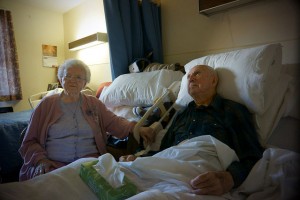 While the idea of hospice and palliative care are slowly becoming part of the national health conversation, many people still struggle when it comes to talking about end-of-life issues.

Just like we all want a “successful life,” we also want to have a “successful death.” But what exactly does that mean? As new research shows, the definition varies depending on the stakeholder.

Dillip Jeste, M.D, director of the Sam and Rose Stein Institute for Research on Aging at UC San Diego School of Medicine, led a team of researchers who analyzed peer-reviewed reports of qualitative and quantitative studies defining a “good death,”  They identified 11 core themes associated with “dying well” among patients, family members (before or during bereavement) and health care providers: preferences for a specific dying process, pain-free status, religiosity/spirituality, emotional well-being, life completion, treatment preferences, dignity, family, quality of life, relationship with the health care provider and “other” as most important to successful dying.

The findings were published in the April 2016 issue of the American Journal of Geriatric Psychiatry.

“We have to have a plan for death as much as possible, just like we have a plan for life,” Jeste said in a phone interview. Unfortunately, many families and providers don’t have these conversations with their loved ones until it’s too late. It’s often superstition, cultural taboos or fear that prevents these discussions from occurring. “It’s actually doing a disservice to the person and family.”

The top three themes across all stakeholder groups were preferences for a specific dying process, such as being at home, pain-free status and emotional well-being. For other themes, different stakeholders had other levels of emphasis. Patients view the end of life as encompassing not only the physical components of death but also psychosocial and spiritual concerns. They more often cited religiosity/spirituality as important than did family members, who believed dignity and life completion were more critical to a good death. Pre-bereaved and bereaved family members rated quality of life as nearly twice as important as did patients.

Health care providers tended to represent a middle ground between patients and family members. Preference for dying process was the most frequently endorsed core theme of a good death, followed by pain-free status, dignity and emotional well-being. Among all three stakeholders, relationship with providers was found to be the least important specific theme.

“Dignity” was an important component of a good death in 70 percent of family responses, compared with 55 percent of patient perspectives. This finding counters previous research which argued that patients greatly value maintaining dignity in the late phases of life, Jeste said. However, definitions vary, and the concept of dignity may mean different things to patients and to family members at this stage. It’s another reason to discuss what patients want and value.

“Families and providers often fear that talking about dying with a terminally ill patient will lead to depression, but in reality, it’s a relief for them,” Jeste said. “Many dying patients want to talk about having a good death and often, family members say that their greatest regret is not having that conversation.”

The team concluded that more research on the psychological components of a good death is needed, especially in developing effective screening measures and appropriate interventions for dying patients. It may be possible to develop formal rating scales and protocols that will prompt greater discussion and better outcomes, Jeste said.

In the meantime, patients, families and providers can make it possible to have a good death by talking about it sooner rather than later.