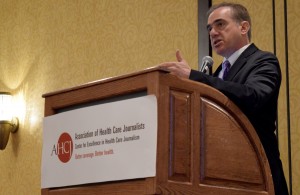 Photo: Len Bruzzese/AHCJDavid J. Shulkin spoke at Health Journalism 2016, pointing out some of the agencies successes.

David Shulkin, M.D., undersecretary of health for the Department of Veterans Affairs, faced two challenges at his Newsmaker Briefing on Friday morning.

He had to compete with a free breakfast buffet with fruit, eggs, bacon, ham, pastries, oatmeal, potatoes and more (thanks, Institute of Health Metrics and Evaluation).

And there was this page-one, above-the-fold headline in USA Today: “VA bosses falsified veterans’ wait times.”

AHCJ President Karl Stark introduced Shulkin by saying he’d known the top VA exec before he (Shulkin, presumably) had grey hair. Shulkin, a former hospital executive and entrepreneur, has been head of the VA for just under a year. He started his talk by getting the elevator music turned down (the AV crew came through, to some applause), and quickly got to Donovan Slack’s article in USA Today.

The claim that VA supervisors ordered employees to report shorter wait times than veterans actually experienced comes from data that’s nearly two years old, Shulkin said. “This has been our top priority since I became undersecretary,” he said. He credits 20 million additional “provider hours” of care, and the use of pharmacists to design prescription drug treatment plans.

He cited recent VA surveys showing that 89 percent of veterans said they were satisfied with their access to care.  “I challenge you to find any health care system anywhere in the country” with numbers like that, he said. “I don’t think there’s recognition of what we’ve done.”

Shulkin had his own challenge for the audience. “The story that has been difficult for your colleagues to tell is that access is getting better in the VA system.”

He promised that the VA will become more veteran-centric. He vowed that by the end of this year same-day appointments for medical and mental health care will be available to those who need it across the system (right now that’s offered by 34 facilities).  And he bragged about improvements in various socioeconomic factors, including a 40 percent reduction in homeless vets over the past four years.

From there it was a list of accomplishments and promises. There’s a new app that allows veterans to schedule their own appointments. It’s already available in 10 locations. With a surprise $1.5 billion gift from Congress (the agency had asked for $690 million), he said the VA will be able to eliminate hepatitis C infection in its 120,000 infected veterans in the next two years. The VA, he said, got a great price on the drug (though he didn’t mention the precise price). And the VA has developed a lifelike prosthetic arm with moving fingers. 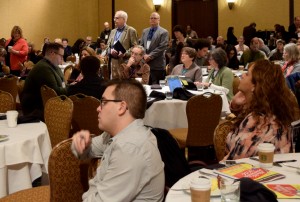 Shulkin knows his mission. “The issue that Congress has been clear with us on is that we are an organization that needs to regain public trust, “ he said. He spoke of pending VA legislation that sets accountability standards and would allow the department to increase the salaries of its hospital leaders – some, he said, are now making only one third of what their civilian counterparts make in the hospital next door.

Shulkin’s life has changed since leaving the private sector. “I used to say to my management team, ‘What’s it going to take, an act of Congress?’”

“Now everything I do takes an act of Congress.”

As the well-fed journalists headed off to the day’s sessions, Shulkin headed back east to begin getting ready for 10 hearings on Capitol Hill before the end of May. The trip home for Shulkin and his media folks was presumably easier than the trip in – bad weather delayed their inbound flight by more than five hours and they finally arrived at 1:30 a.m.