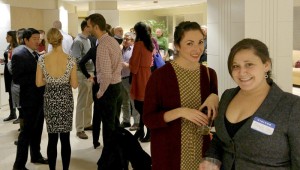 Photo: Phil GalewitzMichelle Stein (far right), of Inside Health Policy, and Rachel Roubein, of National Journal, were among attendees at the Washington, D.C., holiday event.

About 45 journalists gathered on Dec. 10 to toast the holidays at the fifth annual Washington, D.C., AHCJ chapter holiday networking party.

Journalists from Kaiser Health News, Politico, U.S. News & World Report, USA Today, NPR and the Los Angeles Times were among those in attendance. Several federal government spokespeople attended as well, including Katie Hill from the White House, Ben Wakana from the Department of Health and Human Services and Peter Ashkenaz of the Agency for Health Care Research and Quality. 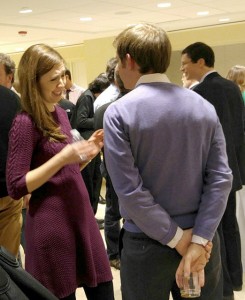 Photo: Phil GalewitzJenn Haberkorn of Politico and Noam Levey of the Los Angeles Times catch up at the D.C. chapter party.

The event was the sixth D.C. chapter event of 2015, the most any chapter has had in one year. The gathering was the last event organized by Phil Galewitz, a senior correspondent for Kaiser Health News and a former AHCJ board member. He is stepping down as head of the  D.C. chapter after six years and 25 events.

Anna Miller and Kim Leonard, both of U.S. News & World Report, have agreed to help coordinate a couple of events in 2016.