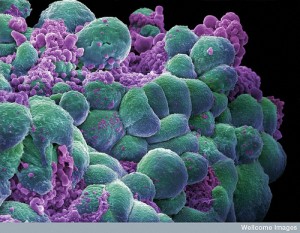 Her story, “Why Doctors Are Rethinking Breast-Cancer Treatment,” opens with an anecdote from now-60-year-old Desiree Basila, who several years ago decided to do … nothing after receiving a diagnosis of ductal carcinoma in situ (DCIS), a stage 0 cancer in the breast ducts that was not invasive – and may never become so. What makes this opening anecdote striking was not simply Basila’s decision – one that has been discussed more often in recent years – but when it occurred:

“That conversation took place eight years ago. And if it sounds radical today, it was all but heresy back then. This was before the U.S. Preventive Services Task Force said in 2009 that women should start mammograms at 50, not the previous guideline of 40, because there’s insufficient evidence that earlier screening does more good than harm. Before research showed that for some women with Stages 1 and 2 breast cancer, the absolute survival benefit from preventive double mastectomies is less than 1 percent after 20 years. Before the paper in August showing that no matter how a woman is treated for DCIS, the mortality risk is 3 percent – similar to the average for the general population. And before the news that some women with early-stage breast cancer don’t benefit from chemo and can skip it. In other words, that conversation took place before doctors and patients were faced with the evidence that in the U.S., many women with breast cancer are being massively overtreated.”

The article goes on to discuss the “aggressive treatments, designed in earnest to save women’s lives, (that) can have unforeseen and sometimes devastating consequences.” O’Connor reports that about 20 percent to 25 percent of breast cancers diagnosed through screening now are DCIS. Of these, some will become invasive and life-threatening, and some will do little more than lay dormant in the ducts. The problem is that doctors don’t have a reliable way to tell the difference yet. O’Connor quotes Dr. Eric Winer, director of breast oncology at Dana-Farber/Brigham and Women’s Cancer Center: “Our two greatest challenges are figuring out better treatments for the 40,000 women who die of breast cancer every year, and at same time, figure out who, on the other end of the spectrum, is getting exposed to needless toxicity.”

It’s great to see a major magazine, one that once helped set the agenda for national health news in the days before the Internet took over, paying attention to an issue that many, such as Gary Schwitzer at HealthNewsReview.org, have been talking about for years. That the idea that breast cancer is often overtreated — an undeniable reality when one looks at the evidence — is finally headlining major, mainstream consumer publications shows how far we’ve come in incorporating the evidence base into how we think about, discuss and write about cancer. It also sets a benchmark of sorts: any health journalist who writes about cancer and does not consider the possibility of overdiagnosis or overtreatment is not doing due diligence. Not all cancers are necessarily over-diagnosed, nor overtreated. But there’s evidence that breast cancer is both, and it’s costing billions of dollars.

As critical looks at the screening, diagnosing and treating of breast cancer and other types of cancer increase, journalists need to keep up. “Everyone says surgeons and radiologists need to know more about how to do less,” O’Connor writes, but surgeons and radiologists aren’t the only ones. Journalists also need to know more about doing less when it comes to cancer treatment. That’s the only way their readers will too.