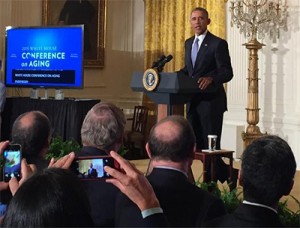 It’s difficult to describe the experience of walking into the East Room of the White House as an invited member of the press for the once-a-decade White House Conference on Aging.

The Department of Health & Human Services announced several initiatives, including $35.7 million in funding by HHS to improve geriatric training for physicians and other health providers, a proposal to improve care and safety in long-term care facilities that participate in Medicare or Medicaid and plans to improve dementia training for nurses and aides. Earlier, the administration announced an effort to revamp nursing home regulations, which have remained unchanged for 25 years

Ninety-three year old Bernard Nash, D.P.A., a delegate to the first WHCOA in 1961, kicked off the day with a brief but moving plea: “Thousands of baby boomers are looking to us to shape this part. It’s time to get to work.” He introduced White House Senior Adviser Valerie Jarrett, who stressed that “we are all in this together; we’re responsible for each other.” With Americans over age 65 living another 20 or 30 years, “we need to reshape what it means to age in America,” she said.

Jarrett called on Congress to strengthen the Older Americans Act to ensure financial security and stability in retirement and to reject all calls to privatize Social Security. Jarrett spoke about her still active 86-year old mother, Barbara Bowman, when discussing the potential of elder contributions to society in their later years. “She’s not stopping any time soon.”

Participants reiterated the challenges associated with family caregiving. Their prepared remarks were followed by a well-scripted question-and-answer session led by Hyde Pierce. Fernandez announced the expansion of a Blue Plus program to create more dementia-friendly communities across 15 cities in 2016. They are in addition to the six locations in the pilot program: Denver; Knoxville,Tenn.; Tempe, Ariz.; Santa Clara, Calif.; Prince Georges County, Md.; and the entire state of West Virginia.

When President Obama took the podium, he spoke about his grandmother, “who worked hard all her life and was able to reap the benefits of Medicare, and the promises this country made to her.” Her grateful grandson, “who happened to be president,” said it’s a promise “we have to make sure we keep for future generations.”

Obama also said he wants to ensure that there are “enough home care workers looking out for our family members.” He reminded participants not to discount anyone because of their age, pointing to guest Diana Nyad, who swam from Cuba to Key West at age 64, and referencing “arguably the toughest justice on the Supreme Court, Ruth Bader Ginsberg, also known as the Notorious RBG,” who is 82.

Obama highlighted the administration’s accomplishments on Medicare and Social Security – pointing out the 13-year gain in solvency of the Medicare Trust Fund since signing the Affordable Care Act into law in 2010. He reiterated the need to continue to slow health care spending and to move toward outcome-based, preventive care.

“The goal is not to cut back on services, the goal is to make sure you get more of the services you need and less of those you don’t.” He talked about the lack of retirement savings among older Americans and said new initiatives like myIRA, will help millions of Americans who lack employer-sponsored retirement plans.

Noting the anniversaries of Medicare and Social Security, he said, “on this anniversary of those incredible achievements we need to recommit ourselves to finishing the work those other generations started.”

Financial security was the subject of the post-presidential panel, with remarks from Jean Chatzky, of AARP; Vickie Elisa, from Mother’s Voices; Robin Diamonte, chief investment officer, United Technologies Corp.; and Andy Sieg, managing director at Bank of America Merrill Lynch. U.S. Department of Labor Secretary Tom Perez moderated the session, which covered retirement savings options, suggestions on how to assist lower-wage workers to fund their long-term savings, and ideas to keep on top of financial scams and abuse of older investors.

Much of the discussion touted the achievements of the entrepreneurs and how the companies tied into the needs and wants of older adults and the need for companies to innovate to meet this increasingly important market.

A key conversation of the afternoon session occurred between Agriculture Secretary Tom Vilsack and Meals on Wheels chief advocacy officer Ellie Hollander. Vilsack announced that SNAP benefits can now be used to pay for Meals on Wheels. This move will expand the program to an additional 1 million seniors, said Vilsack.

When it comes to intergenerational connections, swimmer Diana Nyad said that exercise is a natural tie-in. Nyad was part of a panel that also included Surgeon General Vivek Murphy, M.D.; Mayor Matt Hyatt of Iowa City; Kevin Washington, chief executive officer of the YMCA; and Fernando Torres-Gil, director of policy research on aging at UCLA. Nyad’s key message to both youth and older adults is to “never give up on your dreams.”

Vivek said that making neighborhoods safe for intergenerational activities was a priority. “We must create a culture of prevention and to make sure that communities can support these efforts.”

Kathy Greenlee, assistant secretary for aging, moderated a discussion on elder abuse. She called the exploitation of elders “an outrage against humanity.” Liz Lowey, formerly chief of the Elder Abuse Unit at the Manhattan district attorney’s office; Lynne Person, Washington, D.C., long-term care ombudsman; James Baker, head of the International Association of Chiefs of Police; and Scott Druesser, chairman and chief executive officer of First Financial Bank, and head of the U.S Banker’s Association; weighed in on financial fraud, how to best monitor a senior’s finances and efforts to find and prosecute scammers. 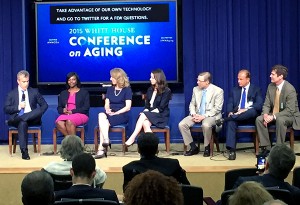 Jeff Zients, of the National Economic Council moderated the day’s final panel on technology. Susannah Fox, from the Department of Health and Human Services; Rachel Holt, president of Uber; Tom Parkinson, president of Peapod; Charles Wallace of Michigan Technical University; Larry Raffone, of Financial Engines; and Donna Levin, head of Care.com participated in what was primarily an overview of how these businesses are educating older adults to be comfortable with technology and how businesses can tap into technology to help older adults remain independent.

Watch for more specifics on the panels and more local story ideas in future posts.

It was an intense, adrenaline-fueled day, and one that veterans of prior WHCOA events told me was unlike those of past decades. With most of the agenda decided months ago and remarks and questions well prepared and heavily vetted, some wondered if this conference will actually accomplish as much as those in the past. It’s worth noting that the media was not allowed to ask questions at any time during the conference.

Some of the initiatives may be little more than wishful thinking, considering the political climate. Congress has not reauthorized the Older Americans Act four years after its expiration. But if sheer will could drive policy change, there was enough of it at this conference to create a permanent social movement.