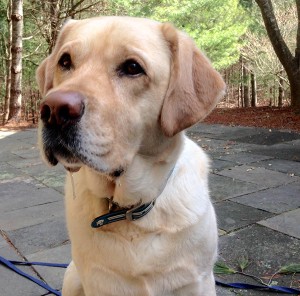 Photo: Joseph BurnsRoscoe, the key to a recent freelance assignment.

My dog helped me land a freelance assignment recently. Actually, my dog’s blogs (he has two) helped me get the gig. To be honest, my 5-year-old Labrador retriever, Roscoe, wouldn’t even have a blog if it weren’t for what I’ve learned at AHCJ’s Health Journalism conferences the past three years.

So, if you’re wondering if attending Health Journalism 2015 in California later this month will be worth your time and effort, read on.

After attending AHCJ’s Health Journalism 2012 conference in Atlanta, I landed enough assignments to cover my costs for that conference and every one since. I did the math for this blog post.

Recently, I discovered that what I learned in Atlanta (and in Boston in 2013 and in Denver in 2014) continues to pay dividends.

Here’s what happened: Earlier this year, a client I’ve worked for in the past sent an email asking if I would research and write a report. But first, he wanted to know how much experience I’ve had with social media. Of course, I have a Twitter account (@jburns18), I’m on LinkedIn and I have a presence on Facebook. I also have a website. Since learning in Atlanta that, as a freelancer, I have to market myself and burnish my image, I’ve added or improved on each of these sites.

The problem with this paltry level of web presence is that it didn’t seem to be enough to land the reporting-writing gig. Isn’t everyone on Twitter, LinkedIn and Facebook? Then I remembered that during one AHCJ session, the speaker encouraged journalists to try out all kinds of social media. And that’s where my dog comes in. Over the past few years, I’ve started a dog blog on each of two photo-sharing sites.

So in my reply to my client, I explained that my dog is on Instagram and on Tumblr. Before sending the message, however, I started to doubt myself. Was this email bordering on being unprofessional? I took out the sentence about the dog. Then I reconsidered: I had to stand out somehow. So, I put back the photo blog references and sent it. By the end of the week I had the assignment.

A few days later I heard from another writer who had been in contention for the same assignment. When she asked the client about the job, he told her I got it because I have more social media presence than she does. That seemed crazy because the only difference between her experience and mine were the two photo blogs. So, thank you, Roscoe, and thank you, AHCJ.

Now, can I write off the cost of his dog food on my tax return? Maybe I’ll find out at the conference later this month.

Editor’s note: Pre-registration for the conference ends at noon CT today, April 8, but you will be able to register at the conference starting at 3 p.m. on April 22.

1 thought on “What AHCJ’s conferences, social media and a dog’s blog have to do with building a freelance business”