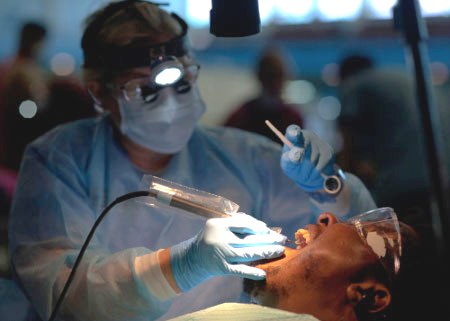 Reporter Katie Hiler decided to look into dental care for the poor in Missouri. The situation, she concluded in her reporting for KBIA Mid-Missouri Public Radio, might best be summed up by a quote from the film Argo: “There are only bad options. It’s about finding the best one.”

Nearly a decade ago, the state eliminated funding for all Medicaid beneficiaries except children, pregnant women and the disabled, she explained.

The move “left a lot of people with only bad options,” she says in a May 15 report.

“Many find themselves in the ER with tooth infections, where cost for treatment per patient can run on average around $9,000. Some try to find affordable care at Federally Qualified Health Centers where services are discounted for low-income patients, but aren’t free.” For the very poor, she added “the only option is charity dental care.”

With that in mind, Hiler took her listeners on a visit to Smiles of Hope in Dexter, Mo., a rare charity clinic run out of a converted church attic by dentist William Kane.

Smiles of Hope, which charges patients $20 a visit, receives hundreds of applications each month from people in desperate need of care. Some live as far away as Kentucky and West Virginia, Hiler reported.

Every month Dr. Kane and two other dentists treat 60 to 70 patients over the course of one day. He calls it controlled chaos. There are so many people in need of emergency dental care, that he compares the clinic to a M.A.S.H unit – a mass casualty dental clinic.

One of the patients Hiler met at Smiles of Hope was Crystal McKuin, a 27-yr-old single mother from Sikeston, Mo., who said she had been suffering for an entire year.

“I’ve been in a lot of pain recently so I’m hoping to get my teeth removed,” McKuin explained.

A decision by the Missouri legislature to restore funding for adult dental care under Medicaid is expected to help to give some poor Missourians more options, Butler noted.

But at the same time, 300,000 low-income adults who would qualify for Medicaid under the Affordable Care Act are shut out because the state has so far balked at expanding the program.