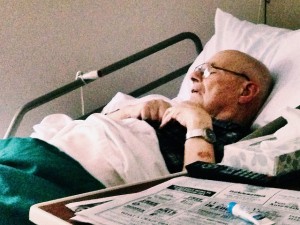 While end-of-life planning may be more common by providers and patients, there are “substantial” racial disparities when it comes to hospice use among some older adults, according to a new study. Researchers found that end-stage renal disease (ESRD) patients who were African American or Native American were 44 percent less likely to take use hospice care than white patients. Asian-Americans were 43 percent less likely to do so. END_OF_DOCUMENT_TOKEN_TO_BE_REPLACED

An op-ed in the October 4 issue of the New York Times reinforces the need for compassionate and comprehensive support for end-of-life care that spares dying patients and their families from pointless and confusing bureaucracy and needless expenses. 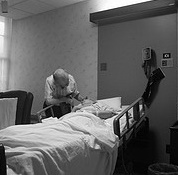 The editors point to Nina Bernstein’s recent article about a daughter that just wanted to honor her dying father’s wishes and bring him home. It’s the kind of reporting that strikes a personal and emotional chord with many readers. The editors also highlight new efforts in New York State designed to alleviate some of these challenges.

Sally Quinn’s discussion about Ben Bradlee’s battle with dementia and his admission to hospice care in a recent Politico story also resonates through use of powerful narrative and quotes.

END_OF_DOCUMENT_TOKEN_TO_BE_REPLACED

Erika Salway, policy adviser for the Senate Health, Education, Labor and Pensions Subcommittee on Primary Health and Aging, discussed the committee’s work on issues affecting older adults, including federally qualified health centers, primary care, oral health, mental health and the Older Americans Act. Funding for the OAA is $1.8 billion, which may sound high, but she reminded the audience that its programs serve 10 million seniors every year and funding constitutes less than .06 percent of the federal budget. The OAA funds essential services such as Meals on Wheels, job training, caregiver support, transportation and elder abuse services. It expired in 2011 but continues to receive federal funds under the old legislative formula. END_OF_DOCUMENT_TOKEN_TO_BE_REPLACED

Lori Kersey is a staff writer at the The Charleston (W.Va.) Gazette. She is attending Health Journalism 2013 on an AHCJ-Rural Health Journalism Fellowship, which is supported by the Leona M. & Harry B. Helmsley Charitable Trust.

View all posts by Lori Kersey →

It’s one of the certainties of life: everyone’s going to die. And most of us also will deal with the deaths of a family member or loved one.

Writing about death, and the care people receive at the end of their lives, isn’t fun, but it’s important, Lisa Krieger, a science and medicine writer for the San Jose Mercury News, said at Health Journalism 2013 on Friday afternoon.

Krieger moderated a panel featuring Muriel Gillick, a physician at Harvard Vanguard Medical Associates, and Ellen Goodman, the co-founder of a project that encourages people to talk about their end-of-life care wishes.

Krieger, who has a degree in biology and worked in hospitals before becoming a journalist, said she was not prepared to make decisions for her father when he got Alzheimer’s disease and ultimately died.

Her experience turned into a series about end-of-life care, which covered the financial toll on family members, lessons learned throughout the process, and the story of one woman nearing the end of her life. END_OF_DOCUMENT_TOKEN_TO_BE_REPLACED

As 10,000 baby boomers turn 65 every day, Medicare spending will skyrocket. About 30 percent of Medicare’s costs are for care in the last year of life. Research has shown that many people nearing the end of life are not informed of their treatment options and their doctors are unaware of their preferences for treatment, which contributes to a lower quality of life at the end of life.

Author and editor Rosemary Gibson has written a guide for AHCJ members that explains hospice and palliative care, the differences in the two, highlights the most recent research, lays out developments and trends for reporters to look for and provides a list of sources and contact information.

Every family is touched by the end of life of a loved one. Every reporter who covers Medicare policy and health and aging issues will want to know about hospice and palliative care.

The tip sheet is just one of dozens AHCJ offers in its special “Aging” core topic area of healthjournalism.org.

NPR’s Joseph Shapiro has unearthed an outlier in the nation’s health care cost numbers, one which demonstrates the reality of regular end-of-life-care discussions that extremists once branded “death panels.”

In La Crosse, Wis., 96 percent of adults die with a living will, a rate far higher than anywhere else in the country. It seems to be no coincidence, then, that at the city’s Gundersen Lutheran hospital, Shapiro writes, “less is spent on patients in the last two years of life than any other place in the country.”

Right now, Gunderson officials say, it’s expensive to take the time to spend the time necessary to educate patients on their end-of-life options, and Medicare doesn’t reimburse the hospital for such activities. Driven by ethical considerations, the hospital spends millions on the program anyway. There’s a provision in the reform package passed by the House of Representatives to pay for these activities, and La Crosse hospital officials are pushing for its success.

“When people see the low cost in La Crosse, there are assumptions about rationing care, about denying care, about limiting — that we limit care for our patients,” says Hammes. But it’s not that dying people in La Crosse are denied care, he says. It’s that they’ve thought out their wishes in advance, so they get exactly the care they want. And often that means avoiding excessive and unwanted care.

Shapiro closes his piece with an elegant summation of the lessons the rest of America can learn from La Crosse:

(That’s) why doctors and patients keep talking about end-of-life care in La Crosse: because choices are complicated. Because people’s feelings change about the treatment they want. And the best way to handle that is to know all your options, well in advance of a health care crisis.

Steve Kroft of 60 Minutes reports on end-of-life care, finding that “many Americans spend their last days in an intensive care unit, subjected to uncomfortable machines or surgeries to prolong their lives at enormous cost.”

He talks to experts about the process of dying and why so many people end up “dying badly,” that is, suffering and connected to machines in hospitals, despite the fact that most people say they want to die at home.