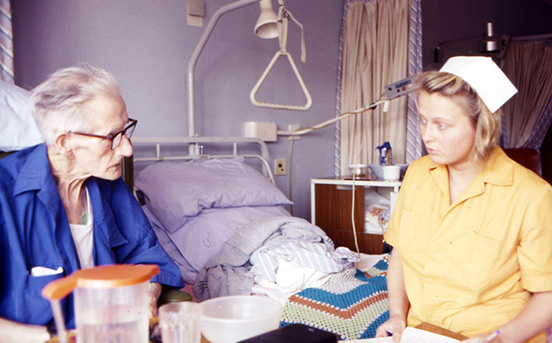 Photo by Richard White via Flicker

A Huffington Post exposé in June, “Hospice, Inc.,” rekindled some thoughts I’ve long had about the split personality of the journalism on complex topics like aging.

One week, readers see richly reported news features, usually by health care or feature reporters, about the struggle of elders and their families caught in this country’s messy long-term care system. The next, readers get stories by political, economics reporters on bipartisan budget debates (how much to cut this year) or exposés that aim for accountability, but don’t help most families.

The Huffington Post project got me thinking – what’s the responsibility of an investigative team posting an approximately 7,000-word, six-month investigation? How can they get beyond house-of-horrors revelations? END_OF_DOCUMENT_TOKEN_TO_BE_REPLACED

New America Media (NAM) just posted the 400th article on its Ethnic Elders Newsbeat page since we started it in late 2008. (NAM is a nonprofit news service working with 3,000 ethnic media in the United States.)

The 400th piece, “Caregivers Break the Silence: Japanese Americans at Risk,” is by Ellen Endo. A veteran editor and reporter in the Asian American media, Endo developed the story for her ethnic media organization, Rafu Shimpo in Los Angeles, under the MetLife Foundation Journalists in Aging Fellows program, a collaboration between the nonprofit NAM and the Gerontological Society of America (GSA).

But it could just as well have been stories by other MetLife Fellows, perhaps Cristina Fresquez-Pizarro’s piece for the Denver-based El Semanario on the high level of Parkinson’s among Latinos, or the next installment of Peter McDermott’s series on older immigrants aging in America for the Irish Echo in New York.

Not only has developing (and sometimes writing) such articles given me a full editorial spice rack of story angles on aging, but it has deepened my belief that reporters can enliven many stories – often in surprising and meaningful ways – simply by finding at least one ethnically diverse source. END_OF_DOCUMENT_TOKEN_TO_BE_REPLACED